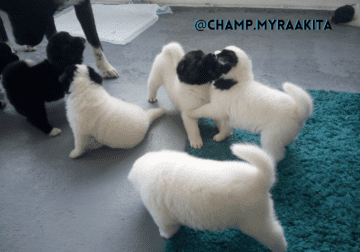 Fearless and Loyal Working Dog and Companion: Akita for Sale

The Akita is a large-breed ancient dog that originated in Japan perhaps more than 5,000 years ago. Its loyalty and magnificent beauty are well-known throughout the world which makes finding Akita puppies for sale near me in 2021 much easier than a couple of decades ago. As with any breed, delving into information about the Akita will dispel some myths and prepare you for the task of raising an exceedingly strong dog.

Overview of Akita for Sale

It is difficult to describe an Akita because there are two types. Most parts of the world recognized the American and Japanese Akita as separate breeds as far back as the 1980s. However, the US made no such distinction until 2020. Therefore, you will want to arm yourself with a knowledge of differences you may encounter on your search for Akita puppies for sale.

An Akita is a large dog with substance but lacking the massive proportions of the Mastiff group. Akitas possess traits common to the Spitz family which include a wedge-shaped head, relatively small triangular ears, a dual plush coat, and a curly tail lying over the hips. The tail can be partially curled, in a full loop, or double-curled. Unique traits of the Akita are rather small, deep-set, triangular eyes and their signature ears which should stand erect and quite forward. Akitas also have compact strong bodies and sturdy limbs. Their neck and shoulders are powerful as are their hindquarters. Like many other working dogs, Akitas have a broad and deep chest and a body height to length ratio of nine to ten (nine to eleven acceptable in females). Akitas have a level back and a quick and powerful gait with medium-length driving strides.

Differences Between the Japanese and American Akita

Japanese Akitas are slightly shorter and significantly lighter than Akitas. Their finer bone structures make them appear to have longer legs and stand taller than the American variety, but a side-by-side comparison clarifies that. The Japanese Akita, also known as the Akita Inu, has smaller ears that it carries further forward than its American counterpart. A Japanese Akita also has a smaller head in relation to its body with less furrowing in the brow and not as pronounced a stop as American Akitas. Where the American variety has a slight dome shape to its head, the top of the Japanese Akita’s skull is flat. The American Akita, Akita Americano in Latin-speaking areas, has less of a wedge shape to its head compared to other Spitz breeds like the Pomeranian or Husky. This reflects the mixture of Mastiff types into the Akita’s ancestry, giving it a more massive and bear-like head. You can best visualize the more triangular head in Akita puppies for sale.

American Akitas can be any color, including white, fawn, seal, brindle, tan, brown, blue, chocolate, red, or silver. They can have unique shades and patterns.

American Akitas frequently have facial masks, sometimes split down the center of their faces by a white blaze. The AKC allows masked or maskless dogs. Japanese Akitas are forbidden to have facial masks. Another way to tell a Japanese from an American Akita is by the color and pattern. Japanese Akitas must be white, red, sesame, or brindle. Sesame dogs are red with black-tipped hairs, known as sable in some breeds. Brindle dogs can have a light or dark base color with contrasting stripes. Pinto is a disqualified color.

White Japanese Akitas are solid with no secondary color. White American Akitas can have a red tint or be hooded. All colors besides white on the Japanese dog must be in a specific pattern called urajiro. Urajiro markings resemble the brown on tan-pointed dogs (Doberman or Rottweiler as examples). Thus, a red or sesame Akita will have white, ivory, or light cream markings down the inner legs and on the muzzle, cheeks, chin, throat, and belly, and under the tail. Brindles also show the urajiro pattern but it is less obvious. Unlike tan points, however, Japanese Akitas usually appear to have a cap because the white extends across the upper and inner halves of each eyebrow and over the bridge of the muzzle.

Akitas are fiercely loyal and deeply attached and affectionate with their owners. American Akitas can be very territorial and protective of property. Japanese Akitas have had more emphasis on companionship but can still be aloof with strangers. With good socialization, both varieties make excellent guard dogs, usually civil with guests. Akitas are alert, courageous, bold, smart, and attentive. Although responsive, Akitas tend to be willful and can react to situations unpredictably. They also have a high tendency to be hostile with other dogs, especially of the same gender. Your best approach with Akitas around other pets should be extreme caution if not avoidance. Akitas have a strong background in hunting dangerous game and dogfighting, and their predatory instincts tend to be high. Small animals such as cats do not have much of a chance around an Akita, although rare friendships can occur. Having an Akita as your only pet will lower your stress levels.

Akitas can be a mixed bag around children. Although potentially playful and protective with kids they know, Akitas are large and powerful and not always gentle. Well-socialized dogs do best with older youths. Some individuals play a fatherly or motherly role with small kids and are instinctively gentle and patient with them. These dogs have given Akitas a reputation for being great with or having a strong affinity for kids. It is wise to never trust such a large dog unsupervised with children under the age of 12 years. Moreover, educate all young people about canine etiquette. Some Akitas without desensitization are intolerant of mishandling. As a guarding breed, many Akitas can be possessive with food and inanimate objects like toys or their beds. Finally, Akitas may be aggressive with unfamiliar children based on prey drive and stranger wariness.

Albeit the similarities between the Shiba Inu and Akita Inu are uncanny, they developed from separate lineages in different areas of Japan. Shiba Inus are much smaller than Akitas at 13 to 17 inches tall and 18 to 22 pounds. Like Akitas, scientists consider them a basal breed. They originated for small game flushing in Chubu, a central mountainous region of Japan. Akitas originated for large game hunting in Akita prefecture which is in a region north of Chubu. Despite its nickname, the Shiba Inu is not a Toy or Miniature Akita. However, it shares many features such as a compact muscular frame, forward ears, a curled tail, and a urajiro color pattern. The colors of Shibas are more expansive than Akita Inus.

Shiba Inus are fearless, friendly, loyal, and feisty. Being smaller dogs than Akitas, they live 12 to 16 years.

An Akita’s lifespan typically ranges from 10 to 12 years. Akitas are healthy dogs with a low incidence of hip and elbow dysplasia, heart disease, and degenerative myelopathy than others in the working group.