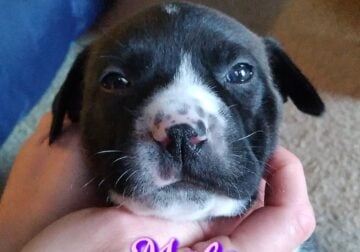 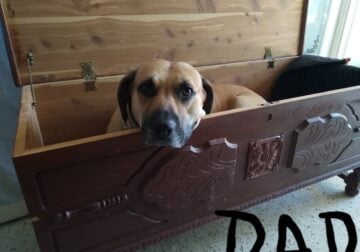 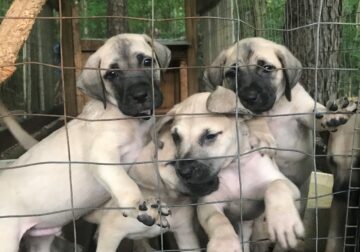 Much like the first Pit Bulls that arrived in America and the Catahoula Leopard Dog, the Black Mouth Cur for sale has become a versatile farmhand with an aptitude for hunting. A bold and energetic dog, Black Mouth Curs do not fit into every family. Curs are wonderful companions for active households and readily learn to adapt to children and other dogs.

Black Mouth Curs have a murky history because people have developed multiple lines throughout the years. Moreover, Black Mouths are just one of the wide variety of curs that exist in the Southeast. Once a general type rather than a pure breed, Black Mouth Curs developed in the South as farmhands in the 1700s. Debate exists about whether they had their official start in Mississippi, Tennessee, or Alabama. Regardless, their forefathers likely came from Spain and France and mingled with Native American dogs. Settlers took their dogs with them when they migrated West, and they became fixtures of Texan life. Curs still retain the versatility to herd livestock, guard flocks, and the home, and track game through the woodlands. When hunting, they fill the same niche as other treeing dogs such as Walker Hounds and Coonhounds. Curs, like many all-around farm dogs, were originally used as catch dogs for cattle. Their skills were eventually honed to corner hogs and tree squirrels, raccoons, and wildcats. Even though the Black Mouth Cur is not recognized by the AKC, the United Kennel accepted this American-based dog in 1998.

Like other dogs that served a similar purpose in historical times, breeders value Black Mouth Curs for their working ability instead of their appearance. Therefore, Black Mouth Curs have variable looks and several names.

The UKC calls for a large but balanced head with high-set ears that fold over at the quarter length. Curs have medium or large eyes with a hint of a slant. Your dog should have a broad head that tapers slightly into the muzzle and has prominent cheeks. The muzzle is slightly shorter than the back skull with a pronounced stop between the brow and the bridge of the snout. Although Black Mountain Curs initially look like American Pit Bull Terriers in the face, a closer inspection will reveal the clear-cut differences.

Black Mouth Curs have a medium-long arched and powerful neck that blends smoothly into the well-laidback shoulders. The bones of the legs are large and appear round. Curs should appear square compared to the Pit Bull. Black Mouth Curs are almost the same height from shoulders to the floor as their length from the chest to the rear of the pelvis. Black Mouth Curs have a moderately deep and notably wide chest. Your dog should have a level topline with a slightly rounded rump and a moderate abdominal uptuck. The tail shows the mixed heritage of the Cur because it can be long or bob and can even have feathers.

Black Mouth Curs are 18 to 24 inches tall and usually weigh between 35 and 65 pounds. A few are much larger, weighing closer to 90 pounds. Supersizing the breed, however, detracts from its versatility as a working dog.

Black Mouth Curs have short, dense fur that can be coarse or soft and fine to the touch. Although the UKC recognizes that Curs can have a variable coat, either long or wiry hair is unacceptable. Most Curs resemble Labrador Retrievers or other sporting dogs with a double coat. The outer layer is usually rough, and the inner layer is soft and luxuriant.

Black Mouth Curs can be any color, but many represent the dog upon which Ole Yeller was based. Thus, you will notice most Black Mouth Curs are fawn (yellowish-tan base color with black masking on the muzzle). Another common sight is a litter of red Black Mouth Cur puppies for sale. Other colors follow below:

Blue and brown dogs represent dilutions and as such often have hazel, blue, or amber eyes. Fawns and black dogs typically have deep brown eyes. Black Mouth Curs are so named because the dark pigment of their skin usually shows up most prominently on their black lips. This dark pigment extends to the roof of their mouth. Some fanciers contend the name stems from the tendency for many dogs to have a black muzzle, but this is not a universal trait even in red or yellow BMCs. Dilute dogs will have visible markings in their mouths, but they may not be black, especially in liver-colored animals. BMCs do not have black tongues like Chows or Shar Peis. The UKC specifies that Black Mouth Curs should have minimal white markings that comprise 10% or less of their color.

Like hounds, Black Mouth Curs are outgoing and friendly. They do not become frightened easily, but they are also not aggressive. However, they have a strong predatory drive that you want to manage when they are very young. The other way a Black Mouth Cur differs from most hounds is that it is an excellent watchdog that can back up its challenge to a genuine threat. Other than barking to announce visitors and intruders, Black Mountain Curs are quiet. The breed standard qualifies the Black Mouth Cur as a silent tracker, only yelping or baying when the trail becomes hot, or they have their quarry treed or bayed (cornered). With early socialization, Black Mouth Curs are easygoing with kids and other dogs. They are dangerous for small dogs and cats because of their high predatory instincts. Children require supervision if they are under ten years old because Black Mouth curs often play roughly. The BMC is an exceptionally poor choice for an apartment.

Typical of medium-large dogs, Black Mountain Curs live an average of 12 to 15 years.

Once you finally decide that a Black Mouth Cur is the dog for you, then your next order of business is to figure out how to best care for one.

It may surprise you to learn that Black Mouth Curs are highly trainable. They are willing to please and love to engage with their people. Furthermore, they are highly intelligent and enjoy the mental stimulation they get from your training sessions. Curs can become distracted by fast-moving objects like cyclists and the running of small animals. Early socialization is crucial, so your dog does not develop antisocial behaviors such as shyness or snapping at strangers.

One of the most challenging qualities of a Black Mouth Cur is how much energy it has. Extremely active and playful, Black Mouth Curs require 60 to 90 minutes of exercise daily as adults. Mental enrichment through training and interactive games or puzzles are important to keep your dog mentally peaceful. Bored curs not only are destructive with their digging and chewing, but they also become fixated on finding any means to escape.

Since Black Mouth Curs mostly have short hard fur, they require only a weekly brushing. Their hair is water- and soil-resistant. It will keep your dog warm in the winter and cool in the summer. Black Mouth Curs are comfortable between 30 and 85 degrees Fahrenheit and at a humidity lower than 15%. They will experience increased shedding in the spring and fall, but it does not approach the “blowout” of Spitz breeds like the Akita or some herding dogs like the Corgi or German Shepherd. Curs are not prone to matting, but your brushing helps the circulation in the skin and oil distribution through the coat. Other grooming rituals are also crucial for you to adopt.

Each individual dog has different metabolic needs, but a great starting point is to feed your Black Mouth Cur between 27 and 33 calories a day. Puppies, especially between six and nine months, require double or thrice the calories of adults. If you feed your Cur a homemade or raw diet, it is more effective to feed based on a percentage of your dog’s weight. However, with puppies and thin dogs, you will still need to factor in calories as well. Most adult dogs need to consume food that is equivalent to about 2.5% to 3.5% of their weight. Puppy percentages can range from 4% to 10%. The quality of your dog’s food is as important as supplying the correct amounts. Black Mouth Curs should eat a diet that consists mostly of animal-based protein along with moderate amounts of fat. Many dogs benefit from the antioxidants present in steamed or pureed greens and raw berries.

Black Mouth Cur Puppies for Sale Near Me

Although you cannot register one with the top American registry, Curs remain common. You can theoretically acquire one at a humane society, but keep in mind that many mixes look a lot like Black Mouth Curs. Proof-positive of this is the movie star that played Ole Yeller because he happened to be a Lab mix from a shelter. Black Mouth Curs do have a high surrender rate because people are unprepared for their activity requirements. A purebred Cur puppy usually costs between $300 and $1,000. Other sources of these dogs are adults and juveniles that people can no longer keep. Whether you are in the market for a pup from a litter or a free dog from a neighbor, check for vigor and an alert and extroverted attitude. Puppies should be free from signs of diarrhea, respiratory disease, or hair loss.

Despite a melting pot background and the implications of the term cur, Black Mouth Curs are purebred dogs. There are several lines of them, complicating the matter slightly.

As happens with many versatile dogs, the Black Mouth Cur mix has become a common goal. Some of the Cur mixes you might frequently see are: