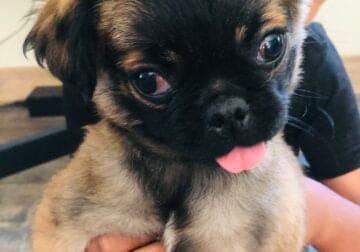 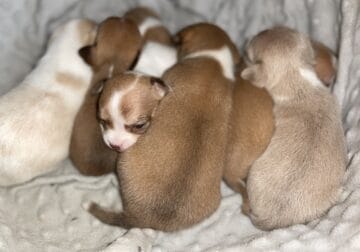 I have a Pug/ chiwahwh puppy that is 11 weeks old

Chug for Sale: Another Form of Delicious

A Chug, A Chihuahua Pug mix, is a relatively new designer dog that is gaining traction as a sought-after small pet. Affectionate yet sassy, the Chug is ideal for families looking for a portable lapdog and a companion that wants to be part of your daily routine. The Chug is endearing, a great watchdog, and an outgoing pal for kids and other dogs.

Overview of Chug for Sale

You will hear terms such as Chug, Pughuahua, and Pugwawa, all of which refer to the Chihuahua Pug cross. Its background requires some guesswork, and its appearance can be unpredictable, but there are several traits you can expect to show up consistently.

Chugs have probably been “accidentally” breeding several times throughout history, but they formally joined the ranks of other popular designer dogs in the early 2000s. Likely originating in the US, the Chug developed for two reasons.

Historians believe Chihuahuas originated from Techichi dogs of the Toltec people of ancient Mexico. Around as early as 800 AD, Techichi dogs, and subsequently Chihuahuas, were used for companionship and food and as sacrifices. People of the US began to acquire Chihuahuas in significant numbers in the early 1800s and used them solely as pets and watchdogs. They joined the AKC in 1903. The Pug, even older than the Chihuahua, most likely originated in China around 400 BC. Their breeders selected generations of Pugs for their flattened and wrinkled faces. These little beasts were companionable lapdogs, initially only allowed to be owned by royalty. Pugs came to America around the 1860s and joined the AKC in 1885.

A Chug can look mostly like one parent breed or the other, but most have a good balance of characters from both sides. You can expect a small dog with a relatively large head and a significant dome shape to the skull. Chugs are not likely to completely lose either the facial wrinkles or the snub nose of the pure-bred Pug. Although the goal is often a less exaggerated shortening of the snout, there is still a significant chance your dog will exhibit at least mild breathing difficulties. A Chug’s eyes are large and almond-shaped, and the ears are small, triangular, and folded down. Chugs have a medium-length muscular neck, a wide shallow chest, and a compact body that is almost the same length and height. The tail will form a sickle shape to a full curl over the back.

A Chug usually has a short double coat depending on the parents. Chihuahua and Pugs alike have varying undercoats with some having very little underfur. The outer coat is rather hard to the touch while the underlayer is soft. Chugs are moderate year-round shedders and are not hypoallergenic. If one of the parents is a long-haired Chihuahua, a few of the puppies in the resulting litter may have wisps of long hair or a hint of feathering on the tails and legs. An occasional pup will have a uniform coat of medium-length, soft fur.

Most Chugs will be fawn, brown, or black and tan. Fawn dogs usually have a dark facial mask while tan-pointed Chugs will have brown markings above each eye and on the chin, throat, feet, and under the tail. Any solid-colored Chihuahua Pug mix can have extensive white markings. Here are the color varieties for the Chug.

Chugs combine the temperamental qualities of the Chihuahua and Pug well. They are sweet and silly like a Pug and loyal and protective like the Chihuahua. A well-socialized Chug is a joy for you, your family, your friend, and other dogs.

Chugs enjoy children but are susceptible to injuries. Older kids are often better for such a small dog than toddlers and other young ones that may accidentally step on her or play too rough. A Chug also is amiable with other dogs, but you must exercise the same diligence with large breeds as you do young kids.

Chug Puppies for Sale Near Me

The Chug can live 13 to 15 years, but its health is affected by what it inherits from its parents and various small-breed issues.

Chugs tend to have fewer breathing issues than purebred Pugs and are more robust without the skull deformities of some Chihuahuas.

The first ingredient in your Chug’s food should be an animal-based protein except for moisture in non-kibble diets. It is important to learn how to read dog food labels and to perform in-depth research. Proteins will often also come from legumes, grains, and starchy vegetables. Although your Chug can extract nutrition from these foods, she requires essential amino acids that only come from meat. Your dog’s diet must also include fats, vitamins, and minerals. Carbohydrates have become a very personal issue with an abundance of differing and equally passionate opinions. Look to your veterinarian or nutritionist for any guidance if you feel unsure.

Chug puppies for sale need training and socialization more than exercise when they come home. You can start training as soon as you acquire your pup and socialize according to what your veterinarian determines is safe with your dog’s vaccination schedule. Puppies should get about five minutes of exercise for each month of age twice a day. As they reach four or five months old, monitor their activities because an adult Chug only requires about 20 to thirty minutes of exercise a day. Puppies can achieve many of their requirements for physical exertion through play, so it is fine for you to focus on teaching obedience and exposing your dog to different people and dogs as well as the various environments he is likely to encounter. Chugs are not particularly athletic, but you can bond with your dog over fetch games, obedience, and teaching tricks. Such activities serve the dual purpose of aerobic exercise and mental enrichment.

Chug puppies for sale have a fine layer of fuzz that does not become very dense even as they mature. Your adult Chihuahua Pug mix requires minimum grooming even if she inherits longer hair. Your routine might look like the following list.

Teacup Chugs are difficult to breed consistently but are six to eight inches tall and preferably weigh seven to ten pounds. Like any other breed, a Teacup Chug is not recognized as a separate entity. Many fanciers do not encourage miniaturizing the Chug any further as it is already a Toy dog.

The Chihuahua and Pug are below average and mediocre in working intelligence, respectively. They more than compensate for their delayed learning of commands with their emotional intelligence and eagerness to please their owners. Your Chug will require a lot of repetitions to learn what you want of him, but his loyalty and willingness to go along with your desires will make for a meaningful training foundation. Your dog is devoted and you must not ruin your bond with forceful training methods or even harsh verbal reprimands.

Breeders use the Pug Chihuahua mix frequently to miniaturize other breeds and make them appear more juvenile with larger eyes, a shorter face, and a rounder head.