Even as the Doodle craze shows no signs of dying out, dog lovers have embarked on a new phase. Showing that their clients cannot get enough of the Doodle or Poo, breeders have created the Double Doodle. A Double Doodle is the crossing of two hybrids. A combination of the Labrador, Standard Poodle, and Golden Retriever make the Double Doodle among the most ideal companion dogs. They are friendly, sociable, devoted, and exuberant, making them a solid match for active families with children and other pets.

Despite their recent surging popularity, Double Doodles likely originated during the rise of the parent breeds between the 1970s to the 1990s.

What is a Double Doodle?

A Double Doodle is a cross between a Labradoodle (Labrador Retriever x Standard Poodle and a Goldendoodle (Golden Retriever x Standard Poodle). Probably bred for years before, the first officially named Labradoodle occurred with Donald Campbell’s cross in 1955. Wally Conron is responsible for popularizing the Labradoodle as a service dog in 1989 when he introduced it to the Royal Guide Dog Association of Australia (Victoria). Goldendoodles sprang up in 1969 with the same purpose as working Labradoodles, to become hypoallergenic guide dogs. Although early crosses may have been tried as guide dogs, Double Doodles were mainly intended to be pets.

Double Doodles are unpredictable in appearance because they are double hybrids. Both of the parent breeds, especially the Labradoodle, can involve multigenerational dogs. These dogs tend to have a lot of Poodle blood. They produce Double Doodle puppies for sale that have more consistent hair coats but more variability in other traits. First-generation Labradoodle x Goldendoodle crosses look more like Retriever mixes and have unpredictable coats. Some features are consistent:

The coat is the most variable feature of the Double Doodle. Most have a variation of a wiry somewhat curly medium-length single coat. However, some have tightly curled hair like a Poodle. The other extreme is a straight double coat like a Retriever. Such dogs usually have feathers on the tail, the backs of the legs, and the chest. Still, other Double Doodles have loose curls or soft waves.

Surprisingly, Double Doodles come in limited colors. Most are solid colors although a few shades in one dog are possible.

A silver or black Double Doodle is rare despite the dominance of these colors in the Labrador Retriever and Poodle, respectively. On the contrary, a golden Double Doodle is among the most common colors regardless of the coat’s texture. Other colors you will frequently see are chocolate, apricot, and cream.

Double Doodles typically combine the best personality traits from all of the three breeds in their lineage. They are friendly, happy, affectionate, and energetic. Like other Doodles, they are intelligent, sensitive, and eager to please. Furthermore, they are sociable with strangers and other animals. Their prey drive is low relative to other breeds, meaning they can befriend cats and livestock. However, you should be cautious about exposing them to small birds, rodents, and reptiles as the temptations to hunt them are likely to be too much. Double Doodles are calm and patient as adults, making them excellent canine companions for kids. They also tend to be vocal with visitors or suspicious occurrences, proving their effectiveness as watchdogs. However, many owners describe them as too friendly, a fact that renders them ineffectual as guard dogs.

Double Doodle Puppies Near Me

Visiting Double Doodle puppies for sale in your area should be part of your research process. The advantages of meeting your prospective puppy before purchase are several:

Be aware that this article refers to the strictest and original definition of the Double Doodle. It is not uncommon for breeders to use the expanded version of the term when marketing a Double Doodle puppy for sale. In such cases, they will refer to any cross of two Poodle mixes. If you want a Labradoodle x Goldendoodle cross, you must narrow your search parameters when looking for a Double Doodle breeder.

*An F1b dog is one way to make a small puppy more of a certainty. An F1b Labradoodle for example is in this case a Labrador Retriever x Toy Poodle mix backcrossed with a purebred Miniature or Toy Poodle. Such a dog weighs 25 to 35 pounds. You achieve the same result in the F1b Goldendoodle. By breeding the two F1b dogs, you acquire Double Doodle puppies for sale that are mostly under 35 pounds at maturity.

Double Doodle are generally healthy dogs. Most live between 12 to 15 years depending on their size.

A Double Doodle’s coat care depends on the type of hair it inherits. Most Double Doodles keep their full coats.

On top of coat care, Double Doodles need their ears checked regularly for signs of infection. As they are susceptible to allergies, they frequently suffer from red, moist, and itchy ears. Their eyes need to be wiped daily. They require nail trimmings and baths every four to eight weeks.

A full grown Double Doodle of the standard size will eat 2.5 to 3.5 cups of food daily. Meals should be split into two or more portions and consist of meat and fats. Commercial diets add vitamins and minerals to comply with AAFCO standards for canine nutrition, but you should consult with a veterinarian about these concerns when feeding a homemade recipe. Puppies require 35 to 90 calories per pound of bodyweight depending on where they are in their growth cycles. Pups will eat four to six meals per day. Exceptionally small Double Doodle puppies may need to eat every two or three hours to prevent large dips in blood sugar levels (hypoglycemia).

Double Doodles need 60 to 75 minutes of exercise daily to remain happy and fit. You can and should mix physical activities with games, puzzles, and training that will mentally engage your dog. With puppies, the overwhelming portion of your attention should be on training and socialization. Physical exertion for pups under six months old should be limited to five minutes per day per month of age. Young dogs between six and twelve months should not exercise or undergo advanced training beyond 30 minutes twice a day.

Double Doodles are brilliant pupils and will go beyond your expectations to please you. The biggest challenge to training a Double Doodle is its sensitivity. Perhaps not as sensitive as most purebred Poodles, Double Doodles still require a gentle and calm approach to training. Otherwise, they pick up commands quickly and have a phenomenal memory. You should begin training as early as possible (between 7 and 9 weeks). 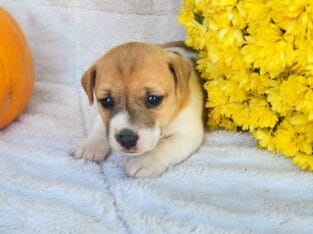 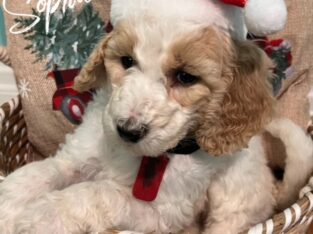