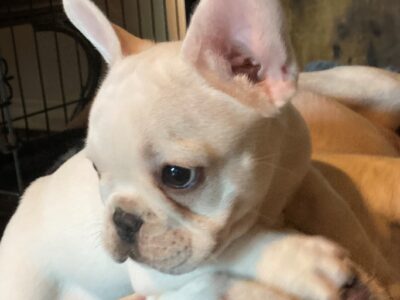 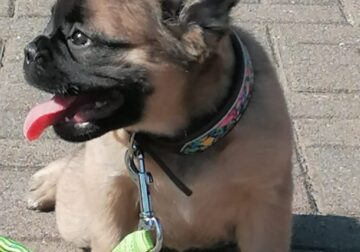 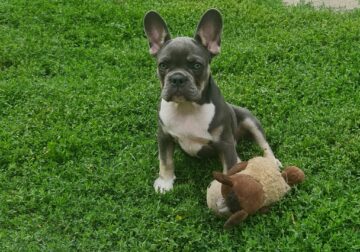 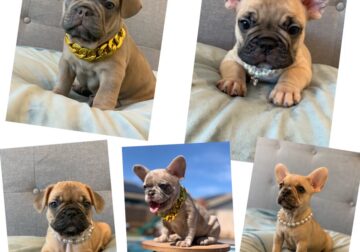 French Bulldogs for Sale: Enjoy the Challenging and Charming

French Bulldogs fit into many family homes because they are sweet, loving pets with an endearing personality. They appeal to busy individuals who do not have time to commit to hours of exercising or grooming a dog. The satisfaction of caring for and enjoying the charms of a French Bulldog very often outweighs the potential expenses of owning one.

Overview of the Frenchie

Frenchies had their start in England and developed in France. The French Bulldog is a companion dog to the bone. Its original purpose was always to be a cute adorable pet. Frenchies owe their start to the English Bulldog which used to be a medium-legged formidable bull-baiting breed. When Britain cracked down against cruelty against baited animals like bears and bulls in the 1830s, Bulldogs lost their jobs and branched into three niches per demand at the time. Frenchies emerged from the Toy dog line. Toy Bulldogs were miniature versions of the Old English breed, and you can see their most appealing features in any litter of French Bulldog puppies for sale. Always prominent is a disproportionately large and round head on a small compact body with short legs and a stubby tail. One of the Frenchie’s signature features is its large bat ears. It also has large round eyes and a flat face thanks to a greatly shortened snout.

How to Pick a Color in French Bulldogs for Sale

Once you can say, “I found French Bulldog puppies for sale near me,” what is next? Color is a prominent feature in Frenchies thanks to the options for rare shades. Standard colors that the AKC recognizes are fawn, white, brindle, and cream. Fawn and brindle Frenchies can have white markings with no penalties. Some dogs are piebald or largely white with fawn or brindle patches. The AKC disqualifies black and white French bulldogs, however. Other rare colors are as follows, all of which are disqualifications according to the AKC.

Unusual colors such as lilac, platinum, or blue

French Bulldogs for sale can command tens of thousands of dollars. Because of the difficulty in achieving rare colors, unusual Frenchies can be more vulnerable to genetic diseases. This is often from close line breeding.

Are there Teacup French Bulldogs?

French Bulldogs are typically a foot tall at the shoulders and weigh 16 to 28 pounds. Females are smaller and less true to the breed standard than males relating to head proportions and musculature. Teacup French Bulldogs are less than 11 inches tall and should weigh well under 28 pounds. It is challenging to consistently breed teacup Frenchies and they are not a recognized variation.

With teacups of any breed, finding a reputable breeder is paramount. Some less ethical breeders may misrepresent runts in poor health from a litter of French bulldog puppies for sale. These runts may go on to have persistent health problems. Other people may crossbreed to miniaturize a Frenchie. If you know about the mix, a crossbreed may have health and conformation benefits. However, it may not look or act quite like a French Bulldog. The most viable source to acquire a teacup French Bulldog is from someone who selects for smaller-sized dogs over a few generations.

As French bulldogs enjoy overwhelming success (No. 2 on the AKC list as of 2020), there is increasing concern to improve their health.
The best option for French bulldogs for sale is to select those with less exaggerated features to breed. Conscientious breeders work diligently to educate the public and ensure the health of their French bulldog puppies for sale. The AKC recommends a few health standards for Frenchie parents.

Caring for a French Bulldog

In many respects, French bulldogs are low maintenance dogs. When you see ads for a French Bulldog for sale, you may think, “Here is a pet that does not require much grooming, exercise, or food.” However, Frenchies need a lot of love, attention, and health care.

French Bulldogs have a short dual coat that needs weekly brushing. They shed moderately year-round with a slight increase in the spring and fall. Many dogs have a very sparse undercoat. Brushing will increase circulation and oil distribution. Allergic dogs may require regular medicated baths if they have secondary skin problems. Flat faces mean crowded teeth, so dental hygiene should be a priority. Clip nails every four to six weeks and check the ears for redness or odor every few days. Make sure to check and clean facial wrinkles.

Frenchies are exercise-intolerant compared to many other breeds. They still require 30 to 45 minutes of activity every day. It is best to break daily walks into multiple sessions and intersperse the exercises with training. It is good to make up for limited physical exertion with mental exercises because Frenchies can be stubborn and resistant to obedience. Frenchies cannot tolerate extremes in heat, cold, or humidity.

Unfortunately, French Bulldogs are vulnerable to becoming overweight which will compound any breathing difficulties. A 15-pound Frenchies needs about 300 to 370 calories a day while a 28-pound dog might need closer to 550. For most house pets this would translate to one to one and three-quarters cup of high-quality dog food each day, preferably in two or more meals. More active, younger, and recovering dogs require more. Frenchies tend to be easy keepers but still require good quality in their protein source which should come from at least one animal source. Since allergies can be a problem in many French Bulldogs for sale, limited-ingredient foods are often a great option. French bulldog puppies for sale should be at least eight weeks old and need you to feed them three or four times a day. Most will benefit if you moisten their food for the first few weeks. Like many dogs, Frenchies may benefit from a homemade diet but you should consult with your veterinarian for appropriate nutrient composition.