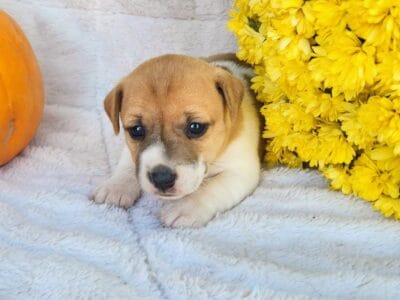 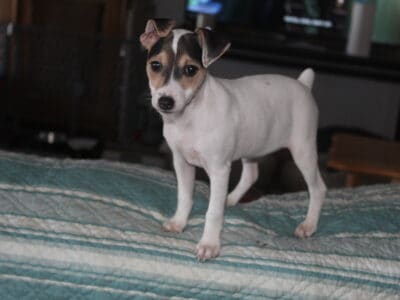 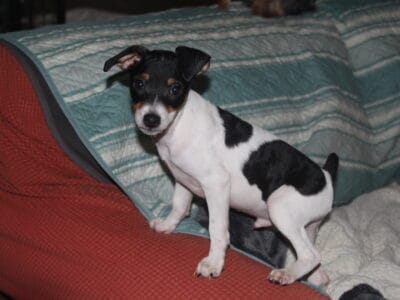 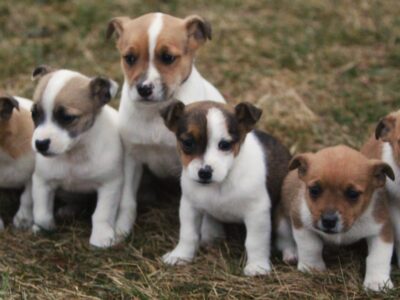 The Jack Russell is a small-breed tenacious terrier with a highly driven and mischievous personality and wicked speed. Its historical popularity never wavering much, the Jack Russell Terrier has a broad scope of uses ranging from racing to accompanying equestrians to entertaining active families. If you are looking for a dog with high intensity and activity but do not want a large breed like a GSD, you might consider many small terriers such as the Jack Russell.

A Jack Russell has a lively not quite foxlike expression. The head is an approximate wedge, tapering gradually from the rather wide forehead to a medium, strong jaw. The skull is flat on top and the prominent cheekbones hint at powerful jaws for the dog’s size. Jack Russells have a clear stop (break from head to snout) and button or hanging high-set ears. The eyes are almond-shaped, dark, and rather small. The neck is relatively long and the legs rather short. All features show strength with muscling more prominent in the hindquarters than the shoulders. A Jack Russell’s chest, while prominent, is not very broad or deep. Jack Russells are working terriers, and like many larger dogs, are slightly longer than tall. The tail is set and carried high. Many owners in the US have dogs with docked tails, but the cut is not extremely short.

Jack Russells have three possible coat types. Regardless of the coat’s quality. it should be weatherproof. The smooth coat is flat with short hairs that all orient in the same direction. It is composed of a soft undercoat and hard outer guard hairs. Alternatively, the rough-coated JRT has hair about two inches long over its entire body. The fur is straight and wiry. Broken-coated Jack Russells have a smooth coat interspersed with wiry hairs that usually are most prevalent on the head and legs.

The preference for a Jack Russell Terrier for sale is that she be mostly (51% or more) white with patches of color. Those patches can be black, chestnut, lemon, tan, brown, or cream. Tricolor dogs are white with black and tan or brown and tan markings.

Jack Russell Terriers for sale should be about 10 to 15 inches tall at the shoulders. They weigh 12 to 18 pounds.

Jack Russell Terriers resemble other terriers in that they are bold, confident, and outgoing. They are also clever and independent. Your pet should be friendly without a trace of shyness or skittishness. Not all Jack Russells enjoy cuddling, but they form strong and lasting bonds with their owners. They enjoy staying near the members of their families.

As you can imagine, a Jack Russell has the high energy and playful nature that can jive well with children. However, like many small dogs, he does better with older children who are more aware of canine etiquette than kids under seven or eight years old. Jack Russell Terriers do not have much patience with rough handling and will not hesitate to snap when displeased despite their sturdiness. Some Jack Russells become skittish with bullying and frequent mishandling.

You will often see Jack Russells in groups, but other terriers may not tolerate your dog’s pushy ways. However, most Jacks get along with other dogs, especially if dominance is established early. Because of her aggressive manner, you must watch a Jack Russell with much larger dogs. Unless they grow up together and you are thoroughly familiar with all dogs involved, you should not leave a Jack Russell Terrier with large guard and herding dogs unattended.

Although not as popular as the Poodle mix, the Jack Russell mix has a strong following. Jack Russells add several endearing qualities to other breeds such as a smart alert expression, wiry or wispy coat, energy, small size, and speed. Many crosses end up with a take-the-world attitude and scruffy good looks. Some popular Jack Russell Terrier mixes are as follows.

Other Jack Russell mixes of note are the Jackaranian, Cocker Jack, and CoJack, involving crosses with the Pomeranian, Cocker Spaniel, and Corgi, respectively.

Jack Russell Terriers are very healthy, typically living 13 to 16 years. If you see an ad for “Jack Russell puppies for sale near me,” then visit them. If they do not come from a rescue organization or humane society, you should be able to get a complete background. Try to see the father or mother. The AKC recommends certain tests to try to eliminate breed-specific problems. These exams include BAER testing (hearing), an ophthalmologist evaluation (eyes), and patellar certification (knees).

Jack Russell Terriers are relatively low-maintenance dogs. As working dogs, they require plenty of exercise and attention from you.

Jacks do not require intensive grooming. You can brush your dog once or twice a week. Long-haired and broken-coated Jack Russells sport their best looks when you strip them twice a year. Stripping is a specialized grooming technique that removes unshed dead hairs from wire-haired dogs. You can learn it or leave it to a professional groomer. Make sure to check your pet’s ears at least weekly and trim her nails every four to six weeks. You can bathe your Jack Russell every six to eight weeks, although an extremely active or a hunting dog may require more frequent rinses.

Jack Russells, with a comparatively sedentary lifestyle, are prone to obesity. You can prevent it not only with exercise but also with a high-quality diet with plenty of animal-sourced proteins. Jack Russell Terriers eat about 35 to 35 calories per pound. Since you are dealing with a small dog, you can freely explore your options of Kibble, wet food, moist and meaty packets, fresh or raw commercial diets, and homemade recipes. A veterinarian can guide you through the maze of homemade or raw dog foods to make sure you provide a complete and nutritionally balanced diet. Jack Russell Terrier puppies for sale will eat 35 to 120 calories per pound of bodyweight depending on growth rate and activity levels. 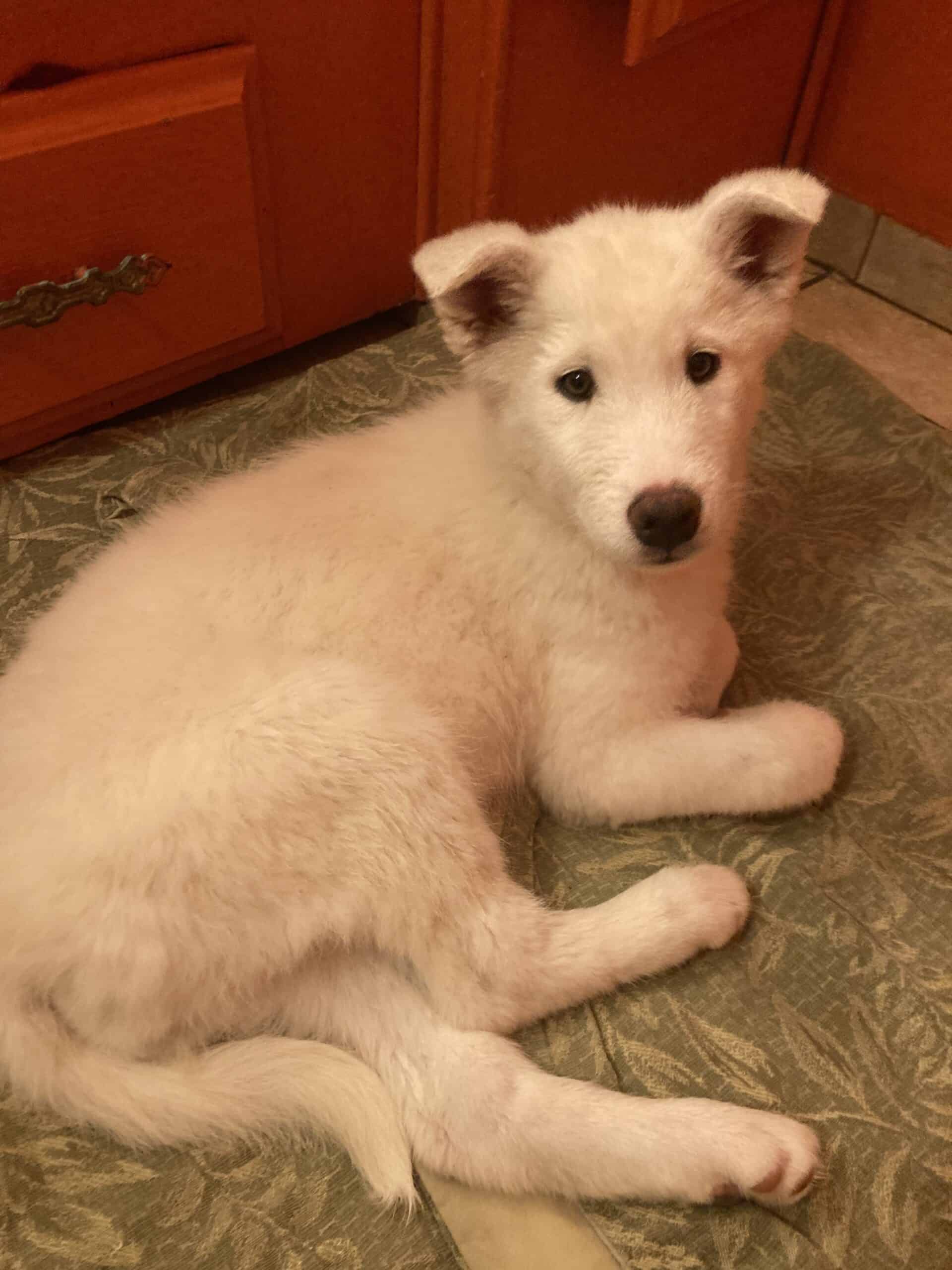 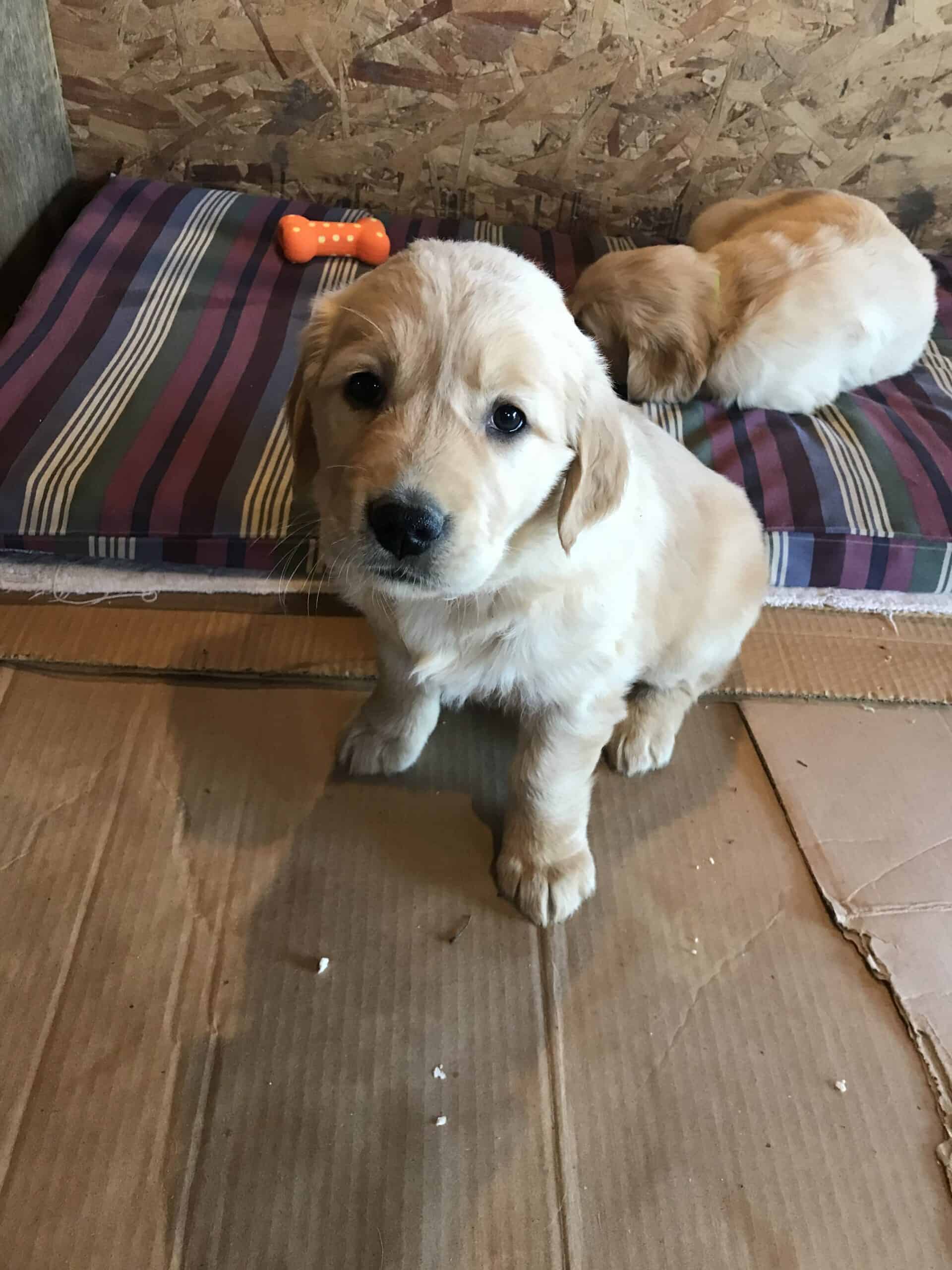 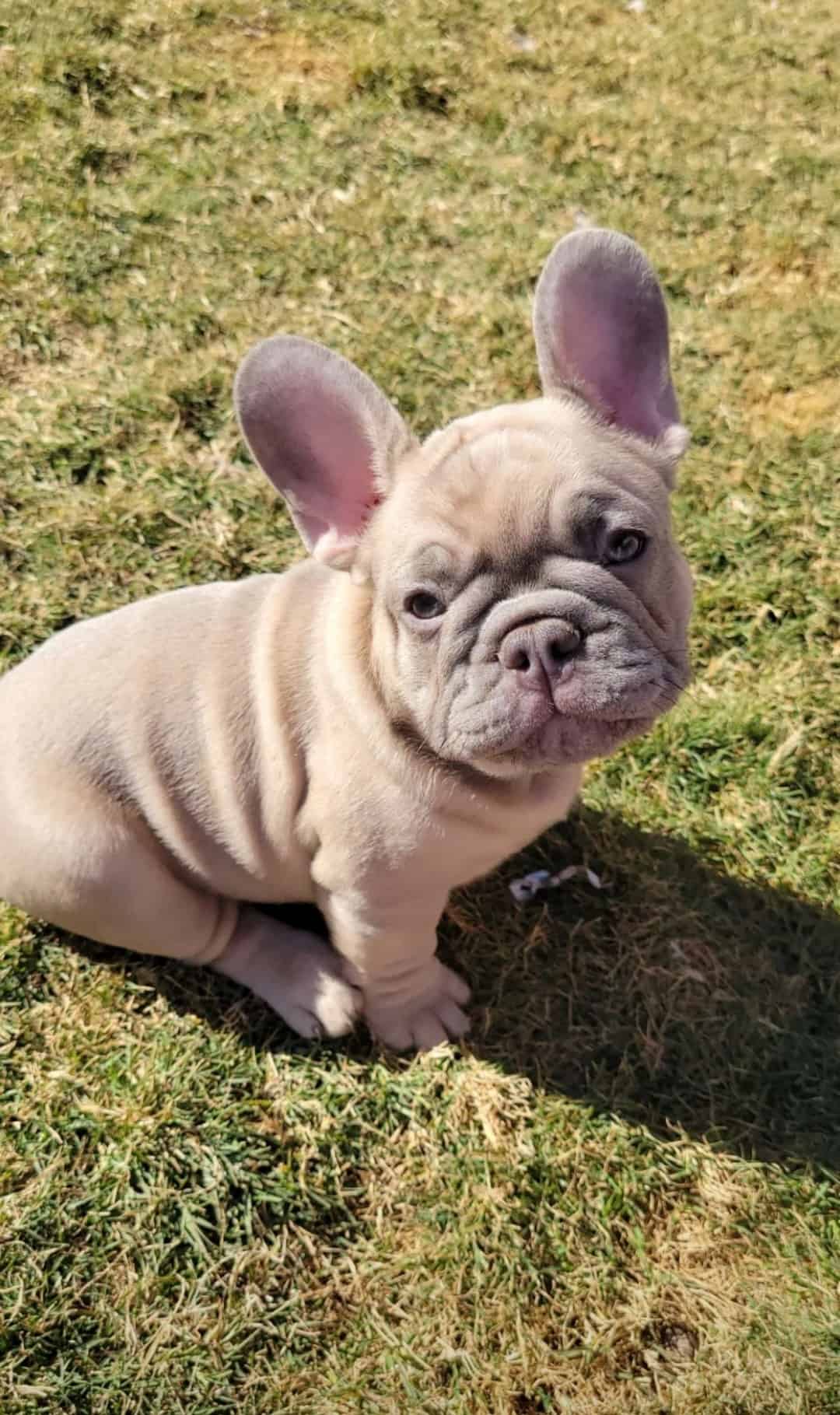