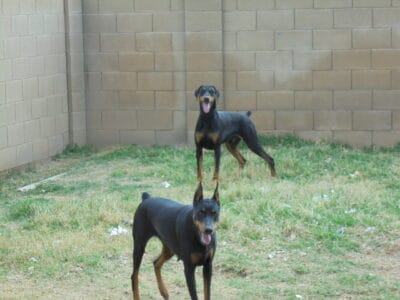 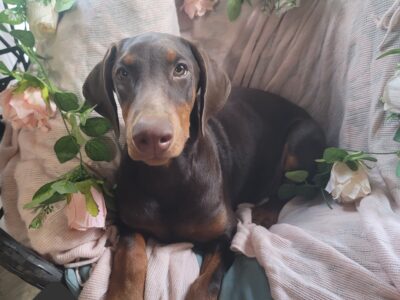 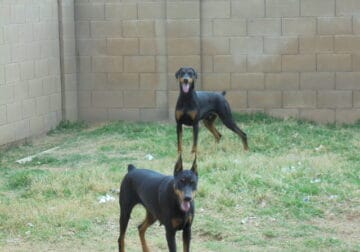 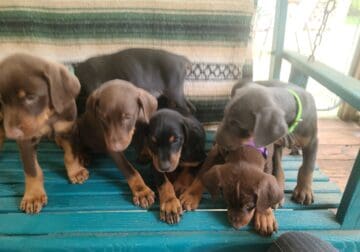 The American Doberman Pinscher has persisted through the decades as a popular pet with a reputation as an excellent guard dog. Often the face of property security, Dobermans have become both status symbols and targets of breed-specific bans. Those familiar with the breed know Dobermans as affectionate, sweet, and loyal companions that do not bite without provocation. Although not for everyone, a Doberman can fit your lifestyle if you have an active household and the time to dedicate to a working dog’s needs in areas of training, exercise, and socialization.

Like many breeds, Dobermans are low-maintenance in some areas but require intensive attention in others.

When considering a Doberman Pinscher for sale, you cannot help but notice her minimal grooming requirements. Dobermans have a single layer of short fur that lies flat, giving them their sleek appearance. A thin undercoat is sometimes visible as gray or brown fine fur. You only need to brush your dog weekly to remove loose hairs and skin and keep the coat glossy. You also should check the ears a few times a week for signs of infection such as redness, a foul odor, or abnormal discharge. Dobermans do not need baths often, but a mild shampoo every six to eight weeks is beneficial to remove deep soiling and lingering odors. You should trim the nails every one to two months. Many Dobermans have dark-colored nails with invisible quicks, so you may want your veterinarian, groomer, or vet tech to perform nail trims.

An average Doberman between 70 and 100 pounds will require a daily intake of 1800 to 2300 calories depending on activity levels, age, and basic health. Most Dobermans are active and hence, the high numbers. Working dogs may need 2500 to 5000 calories daily while seniors only 1350 to 1500. Growing Doberman Pinscher puppies for sale may need 52 to 78 calories per pound each day, but you must be extra vigilant to not overfeed them. Excess nutrition during periods of rapid growth can cause or exacerbate growing problems like hip dysplasia and panosteitis in large-breed puppies. Otherwise, focus on high-quality kibble, raw, wet, mixed, or fresh diets for your dog. These should all include meat in the first five ingredients as well as nutritious fats. Dogs do not require carbohydrates in their daily menu, but you can consult with your veterinarian about any you want to avoid or incorporate. Some dogs exhibit allergies or intolerances to certain grains or other ingredients. Make sure any dog food you decide on is well-balanced with appropriate vitamins and minerals. If in doubt, your vet can help you with this as well.

Dobermans are exceedingly intelligent and eager to please their owners. However, they quickly become large, powerful, and rambunctious, and thus, you need to start training at a young age. A Doberman will rapidly learn his strength and will become more difficult to train as he gets older and starts to acquire his own ideas. Dobermans pick up commands after only a few repetitions and have an impressive work ethic and intensity. Training challenges include a tendency to bully, boss, or disregard inexperienced or novice owners. Do not hesitate to utilize a professional dog trainer. Your efforts should begin at 10 weeks or younger with basic obedience. Dobermans require leadership they respect and consistency. Training should continue regularly even with adults. Dobermans benefit from the interaction of partnerships in competition (agility, Shutzhunde) and the mental stimulation of advanced training skills.

Doberman breeding for family pets focuses on a friendlier and less intense dog than the historical working canines. Nevertheless, you need to socialize your puppy thoroughly to keep protective tendencies in check and create a well-adjusted dog that can appropriately distinguish between threats and everyday occurrences. The most valuable period for intense socialization is between seven and sixteen weeks old. One effective means of socialization is to enroll your dog in puppy classes by the time she is 10 to 12 weeks old. You can speak with your veterinarian about other suitable venues while your puppy is undergoing her crucial vaccination protocol. You must be careful that any dog your puppy encounters has proper immunity and avoid unfamiliar populous areas such as dog parks. Your Doberman is particularly susceptible to deadly viruses like parvo until she receives her last set of vaccine boosters at about four months of age.

Dobermans are a high-energy breed with exceptional stamina. Your Doberman should get two or more hours of exercise every day. Walking does not provide sufficient exercise for a Doberman. These dogs require a certain percentage of their exercise allotment to have a lot of intensity to make them work their muscles. They also benefit from interactive activities with you and a period to cool down. You should interject training and other mentally stimulating exercises into your sessions as well. Puppies under 18 months (about 1 and a half years) are not done growing, and you should focus much less on the physical aspects of exercise and more on training and socializing.

If I saw Doberman Pinscher puppies for sale near me and I wanted the best chance at a healthy dog, I would visit the site. You cannot always see either the mother or father, but you should try. Inquire about records such as whether you can register the dog if you choose and if there are health certificates. The AKC recommends a minimum of a heart, eye, and hip evaluation. Other recommended tests are a thyroid assay and von Willebrand’s test on the parents.

The Doberman was developed specifically as a protection dog by Louis Dobermann in the Thuringian region of Germany around 1890. Dobermann reputedly used many dogs from the shelter in the Doberman’s creation. The breeds that went on to have the most influence on the Doberman were the Black and Tan Terrier, Rottweiler, German Pinscher, and Old German Shepherd. As a side note, the Old German Shepherd should not be confused with the GSD although it had a key role in the ancestry of that breed also. Early Dobermans underwent further refinement with infusions of Manchester Terriers, Weimaraners, and even Greyhounds. Germany originally referred to Dobermann’s breed as the Doberman Pinscher to honor the major founder who had died in 1894. Pinscher recognized the dog’s terrier ancestry. However, Germany dropped Pinscher in the 1940s, referring to the breed henceforth as simply Doberman or Dobermann. Great Britain and the rest of Europe followed suit shortly thereafter. Both the US and Canada still retain the term Doberman Pinscher with the name commonly shortened to Doberman. Whether or not the term Pinscher is used, a Miniature Pinscher or Min Pin is not a miniature Doberman.

How a Doberman Pinscher for Sale Should Look

Dobermans are medium-large dogs, slightly taller and leaner than German Shepherds. They are muscular without appearing bulky with a streamlined head that has a slight stop and a blunt wedge appearance. The ears are high-set and hanging while the eyes are almond-shaped, dark, and deep-set. Dobermans have a slender but strong well-arched long neck, deep chest, and level back. As adults, Dobermans have cat-like feet and strong limbs. The tail is wide at the base and tapers towards the tip with a curve upward. Most dogs in North America have docked tails and ears cropped to stand upright. While Doberman Pinscher puppies for sale have shortened tails by the time you take one home, ear cropping is a procedure your veterinarian will perform between eight and twelve weeks of age.

Dobermans are 24 to 28 inches tall at the shoulders and weigh 60 to 100 pounds. Males are larger and show more musculature than females.

The standard appearance for a Doberman is rust in a stereotypical pattern and a second color. Most Dobermans are black and rust. Brown markings should exist as points above each eye, on the front of the chest, under the tail, on the muzzle, and the lower legs and feet. Other complementary colors besides black are blue, liver (red in this breed), and fawn (Isabella). All alternative colors in the Doberman besides solid black and white or cream are dilute.

Cream Dobermans exist although major registries do not recognize them. Cream Dobermans have very faint markings in the stereotypical tan-pointed pattern. White Dobermans are partial albinos and will be solid ivory to white with pink-rimmed blue eyes. Their existence is still highly debated. On the opposite end of the spectrum are melanistic Dobermans that exhibit minimal to no brown on a solid black coat. They rarely occur and cannot show in AKC conformation events.

Dobermans are loyal, affectionate with their families, and protective. They are extremely smart, very trainable with the right attitude, fearless, and self-assured. A well-trained Doberman is obedient and attentive. A Doberman tends to be reserved around strangers, but some are friendly and warm with guests. Their loud formidable bark makes Dobermans good watchdogs, but most are effective guard animals as well. Well-socialized Doberman Pinschers usually get along with other dogs well enough to play. Males, however, can be dog aggressive. It is rare that you can trust a Doberman completely with a strange cat, although she may strike up a friendship with your family feline. A Doberman can be an excellent companion for a child. Her high energy and size always require supervision around kids under the age of 10 to 12 years. Although frequently feared and banned in many locales, Dobermans should not be aggressive towards people except for some protection-trained dogs. Moderate cases of dog hostility are recognized and not punished in the show ring. Shyness is an unacceptable Doberman trait and indicates irresponsible breeding, poor training methods, or lack of socialization. Finally, Dobermans tend to be one-person dogs, bonding to a specific family member over the others. Dedicated training may encourage your dog to spread his affections more evenly. Be aware that some dogs bond more closely with another dog than any people in the household. 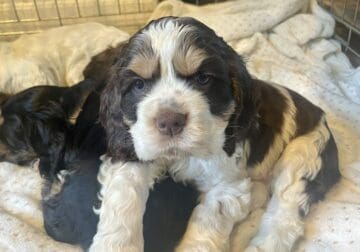