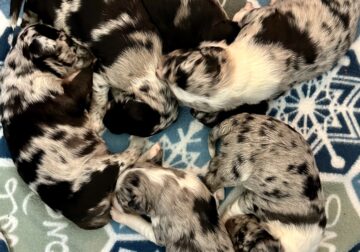 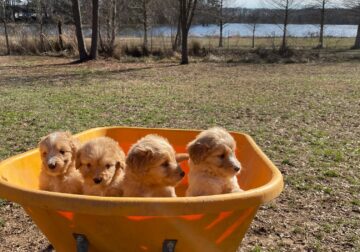 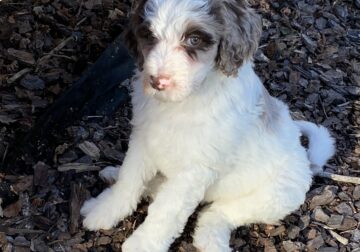 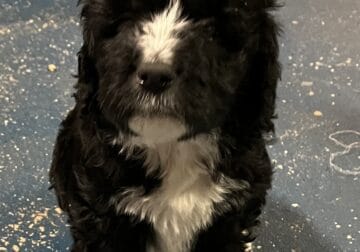 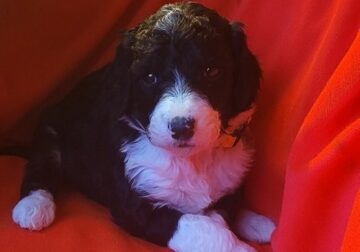 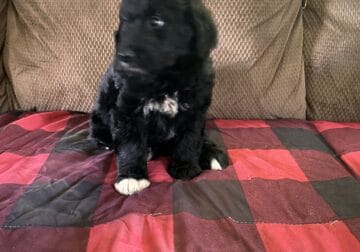 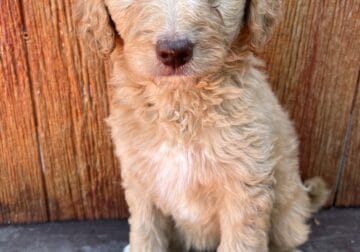 Bordoodle Puppies for Sale: Exciting Up and Coming Doodle Variety

The Bordoodle appears to reach new heights for the in-demand Doodle, creating a smaller and more manageable dog than some of its more famous counterparts. However, it takes special perseverance to keep up with a dog as athletic and intelligent as a Bordoodle. Border Doodle puppies for sale make bright, bonded, playful dogs that get along with other canine or feline pets. They require plenty of physical activities and mental enrichment.

As a hybrid, and a fairly new one at that, a Bordoodle for sale has a variable appearance. Some traits are consistent markers for a Border Collie Poodle mix.

A Bordoodle is usually between 15 and 22 inches tall at the shoulders and weighs between 35 and 55 pounds. However, there are three specific size variants of the cross.

Border Collie Poodle mix dogs have a typical Doodle head with a slightly rounded crown, hanging ears, and round to slightly oval soulful eyes. Bordoodles can have eyes of any shade of brown, although a rare Border Collie gene can occasionally give your dog blue or mismatched eyes. The stop is pronounced. Bordoodles are lithe with strong lean lines through the shoulders, neck, and hindquarters. The chest is deep but not excessively broad, and the abdominal uptuck is moderate. Bordoodles have a level topline and a rather long tail that they often carry upright.

Some Bordoodles have a double coat with feathering on the chest, belly, backs of the legs, and ears, and others have tight curls. However, most Bordoodles, especially first-generation crosses, have coats with a slight to deep wave or loose curls. Their undercoat is minimal. Furnishings include a plumed tail, mustache, brows, and full-bodied legs. Bordoodles are low-shedding except for the dual-coated variety. As you would expect, double-coated dogs shed moderately throughout the year, slightly increasing in the fall and spring.

Bordoodles can be any color or pattern, but most have significant white trimming. Some of the more common colors follow:

A Bordoodle is like the Labradoodle and Goldendoodle in that it is social, friendly, cheerful, and outgoing. Playful and boisterous, Borderpoos make engaging companion dogs for the entire family. They are great playmates for kids, but adults can also reign it back for seniors. Bordoodles are intelligent and interactive and do not thrive with large periods of alone time or without sufficient mental stimulation. They retain some of the protectiveness of the herding dog and serve as excellent watchdogs. At the same time, Bordoodles are known for not being aggressive. Finally, this designer breed gets along with other pets whether they be dogs or cats. Smaller pets are subject to harm from the Bordoodle’s well-developed prey or herding drive. Border Poos may also try to round up small children.

Although it is unknown when the first Bordoodle appeared, its rise as a designer dog is relatively recent. It became a household name among hybrid dog breeders and owners by the late 2010s. The Bordoodle is not recognized by the American Kennel Club but is accepted by several hybrid clubs such as the International Designer Canine Registry and the American Canine Hybrid Club. The original designation for the cross was Borderdoodle, eventually shortened to Bordoodle by most registries.

Border Collies, originally Scotch Sheep Dogs, were a specialty product of several sheep herding dogs in Scotland. These generic landrace dogs also gave rise to the Rough- and Smooth-Coated Collies (Scotch Collies). Scotch Collies were standardized around 1860. The Border Collie breed standard and herding style became cemented with an influential foundation sire, Old Hemp, in the 1890s. They received their current name to differentiate it from the Scotch Collie in 1915. Border Collies were bred to herd livestock without nipping and thus have a trademark strong eye. This enables them to control sheep mostly by eye contact. Nevertheless, Border Collies can be mouthy with people. The AKC accepted Border Collies in 1995.

No one knows for sure where the Poodle originated, but many registries give the credit to Germany. However, the breed had strong influences from France and eventually became its national dog. Whether it came from Germany, France, or Asia, Poodle ancestors have been depicted on artifacts from ancient Egypt and Rome. They were developed to retrieve waterfowl from the marshes. The Germans honed these skills even further as early as the 1300s. Miniature and Standard Poodles appeared early in the breed’s development and worked in a variety of capacities including retrieving, performing in circuses, hauling sleds, and hunting truffles. The Poodle’s elaborate haircut began as a practicality for retrieving birds in frigid water and running through the brush. Its array of fancy hairstyles truly took off in France. Poodles joined the AKC with three varieties (Standard, Miniature, and Toy) in 1887.

A Border Collie Poodle mix typically lives between 12 and 16 years. It is a healthy and hardy breed.

Mini Bordoodle Puppies for Sale Near Me

Weight defines Mini Bordoodles, not height. The goal for Miniature Bordoodles is that they are under 35 pounds as adults. Breeders obtain them by crossing a Border Collie with a Miniature or Toy Poodle. Results are not entirely predictable, but you will generally see a Medium or Miniature Border Doodle. Breeding Bordoodles back to Miniature Poodles gives more consistent sizes. The smallest Mini Borderdoodle puppies can have an increased incidence of tracheal collapse and hypoglycemia (persistent low blood sugar levels).

Luckily, other than a lot of dedicated affection and attention, Bordoodles do not require more specialized care than other dogs.

Bordoodles can keep their natural coats, or they often receive a puppy clip. The typical haircut involves using electric clippers to create a uniform short length on the body and trimming the head, so it looks in balance. A professional usually trims the long hair around the eyes also. A natural coat requires brushing twice a week unless exceptionally curly. The curlier the hair, the more often you will need to brush your dog. Clipped dogs may only need to be brushed weekly. A four- to eight-week schedule is ideal to maintain a haircut, and most owners go through a professional groomer. Other parts of your grooming routine should involve the following tasks:

Borderdoodle puppies do not need an organized exercise regimen beyond a few minutes each day. They usually get enough physical exertion through play. To protect their growing skeletal structure, pups only need five minutes of exercises per month of age in a 24-hour period. Otherwise, your focus will be basic obedience training and socialization to as many people, vaccine-safe dogs, other animals, and environments that you can. Adult Border Doodles are active dogs and require 45 to 60 minutes of exercise daily. Mini Bordoodles require slightly less exercise at 40 to 50 minutes daily. Incorporating additional training and other mental activities into your dog’s exercise routine is vital to her well-being. Teaming up with your pet in such activities as agility, obedience competitions, herding trials, and flyball can accomplish physical conditioning and mental enrichment at the same time.

Hopefully, a Bordoodle puppy for sale will come to your home with a small sample of the food she has already been eating. With adults, also, you want to make all transitions to a new food or protein source gradually over several days.

Your Bordoodles requires meals that have animal proteins as the major ingredients. Other required components are fats, vitamins, and minerals. Some commercial dog foods add vitamins and minerals in the form of supplements while others seek to use whole-food sources. Carbohydrates are not required by dogs, but certain fruits and vegetables may provide important benefits such as preventing cancer.

How Much to Feed

Bordoodles requires about 29 to 34 calories per day (Minis need 32 to 36 calories daily). Puppies have two to three times the caloric requirements of an adult while seniors may need 10% to 20% less. If you feed raw or otherwise fresh food, the general rule is to calculate 2% to 3% of an adult’s weight or 4% to 12% of a puppy’s weight depending on age and activity levels. For example, you might feed a 40-pound dog one pound of a home-cooked recipe daily, accounting for 2.5% of his body weight. Because of the risk of bloat, you should divide your dog’s food rations into two or more meals daily, especially if you feed kibble.

Expect your Bordoodle to be among the top three dog breeds in intelligence. This means your pet will learn commands easily but will also be able to figure out some things on its own. Bordoodles are responsive, willing to please, and eager to learn. However, they can be sensitive and become bored easily. Therefore, you need finesse and imagination when you approach training your Borderdoodle because they still require consistency and repetitions. 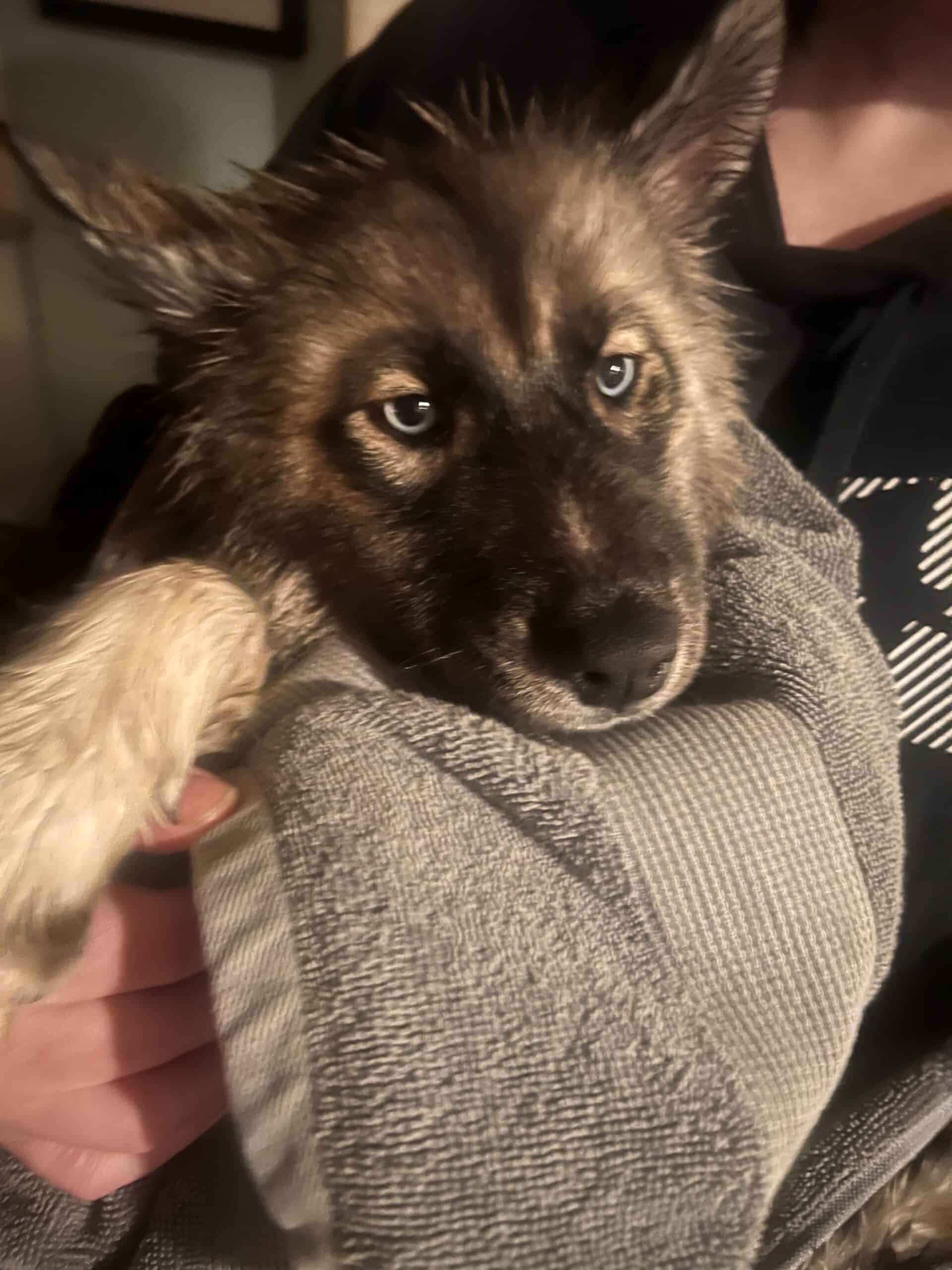 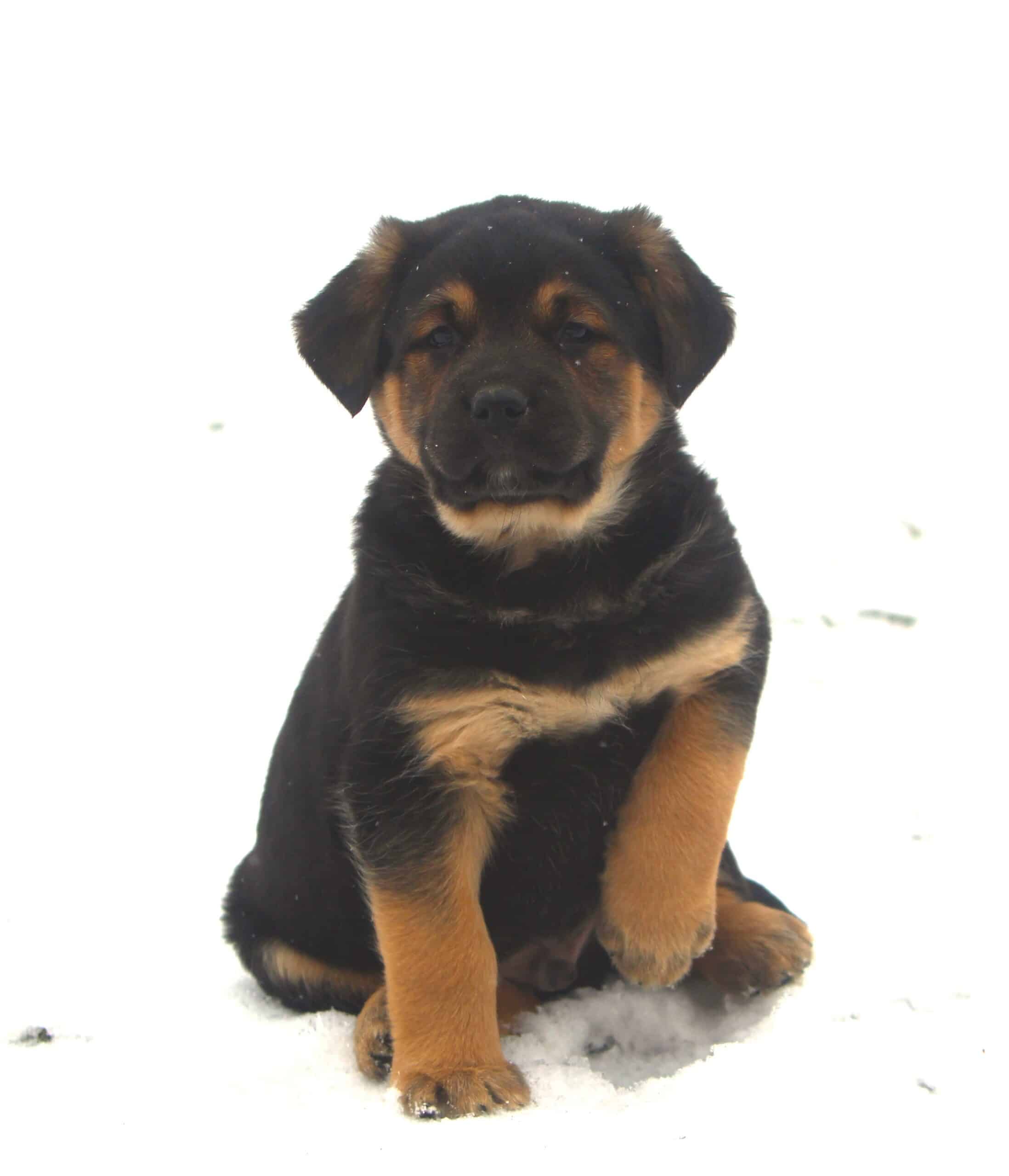 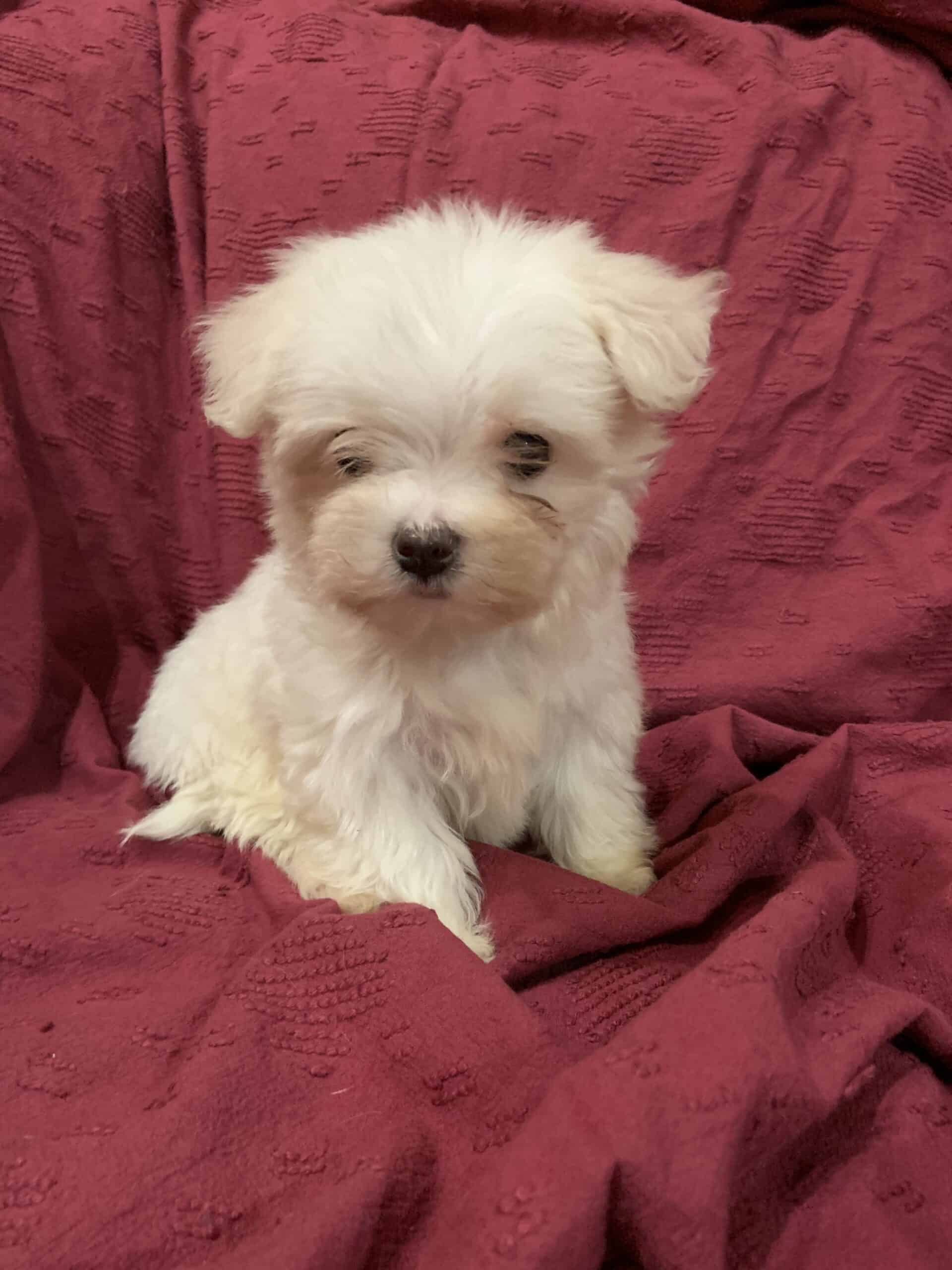 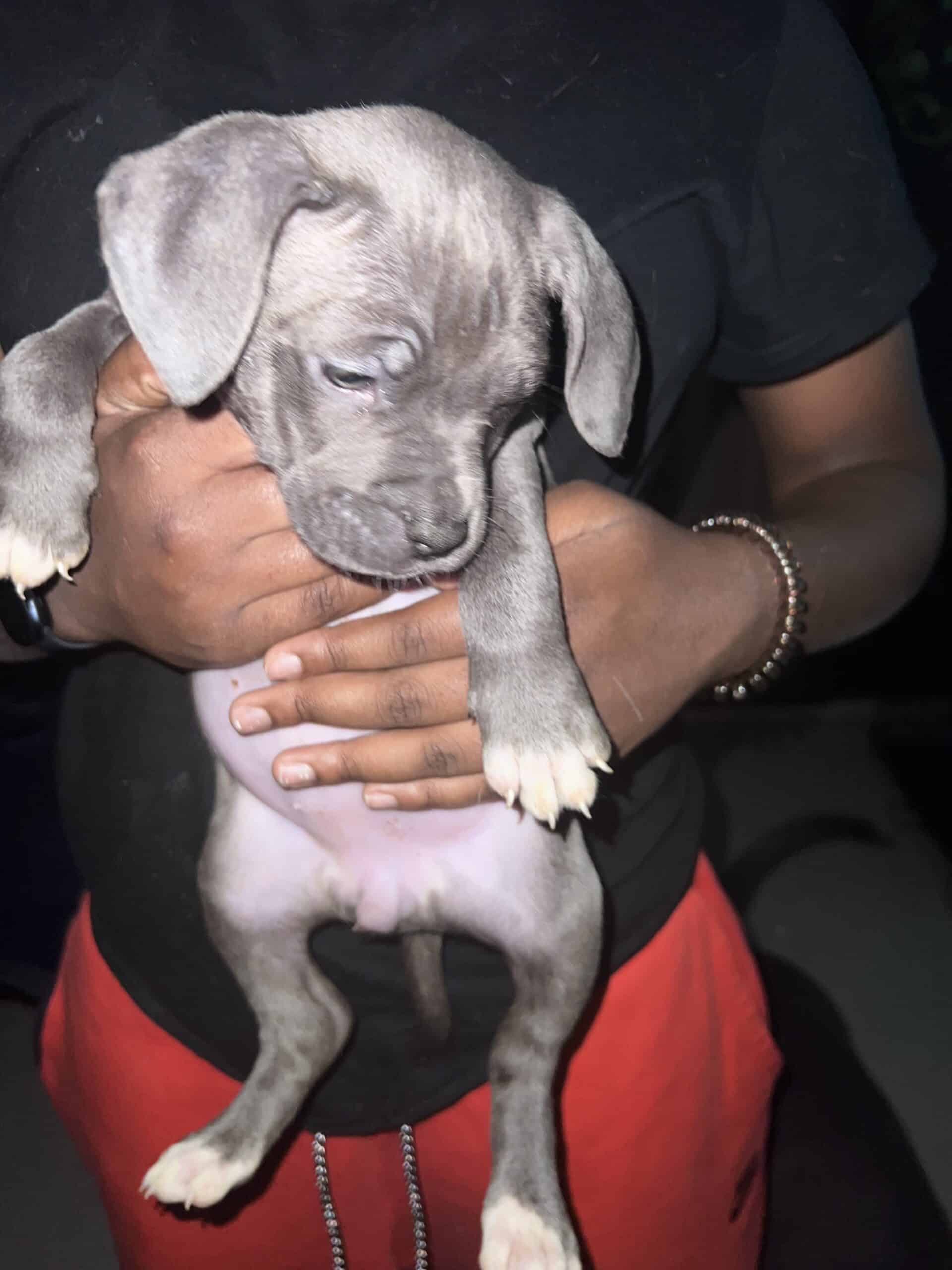