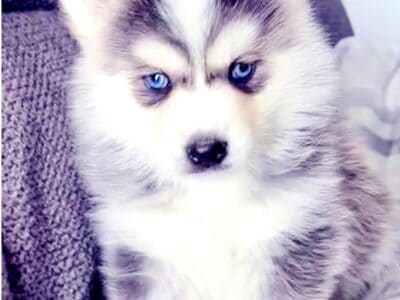 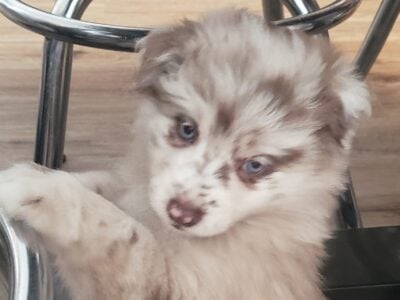 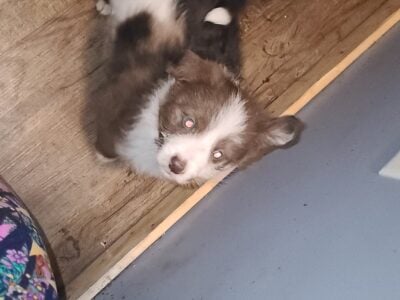 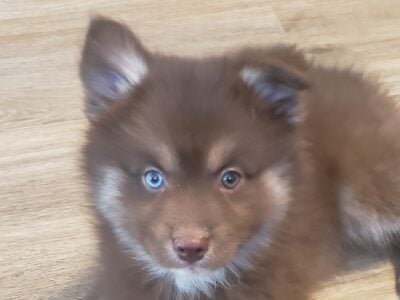 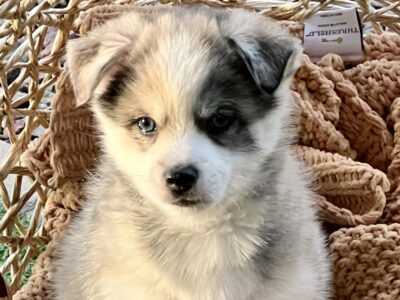 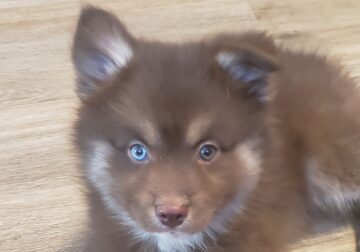 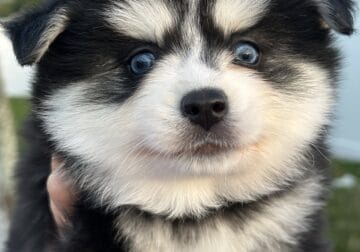 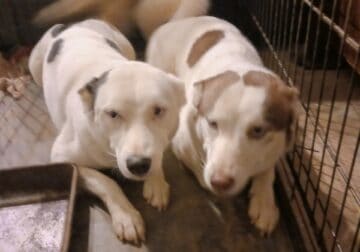 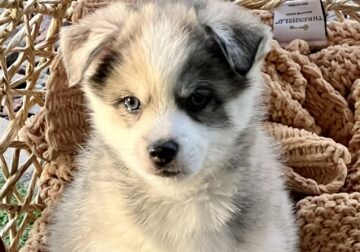 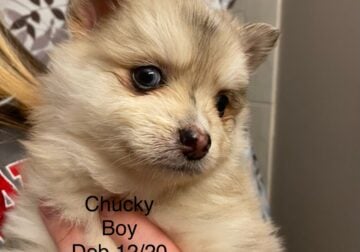 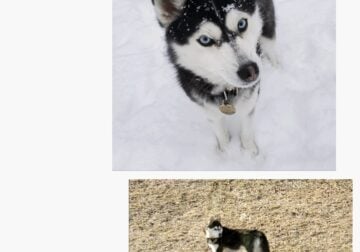 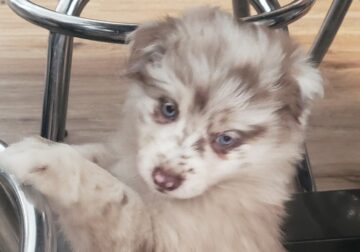 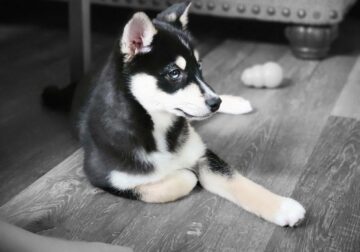 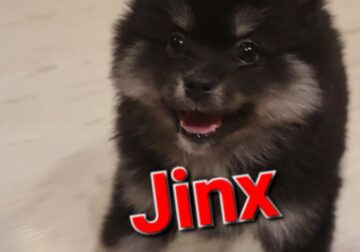 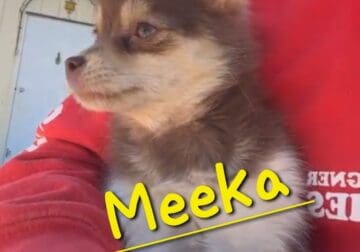 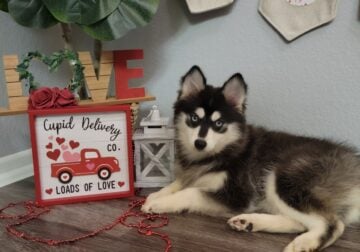 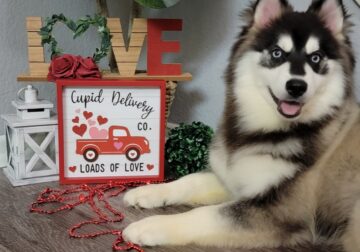 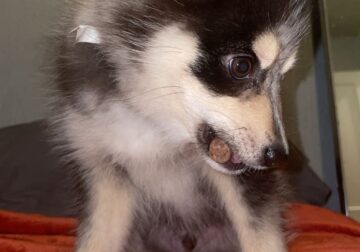 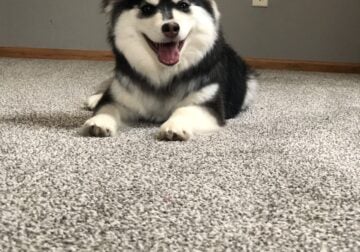 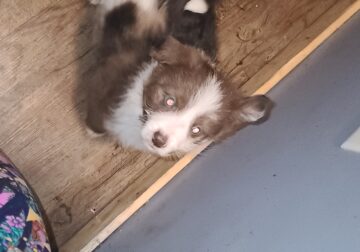 If you look at the word Pomsky for a few seconds or less, you can probably deduce it is a cross of a Pomeranian and Siberian Husky. You may also be familiar with the breed because of its persistent popularity. A medium-sized dog with upright ears, a cheerful expression, lots of energy and enthusiasm, and a curled tail, the Pomsky is a great dog for active families and individuals alike. Pomskies like kids and other dogs, are interactive and often vocal participants in your daily routines and provide loving friendship. If you or your family have time to commit to an active dog with a working and companionship background, a Pomsky may be an excellent household addition.

Pomeranians originated from the larger German Spitz and possibly other Spitz types in various parts of Europe around the 1700s. Historically, the German Spitz and early descendants were mid-sized sled dogs in the 1450s. The Pom’s name comes from the area in Germany near the Baltic Sea where some experts believe downsizing began. The Pomeranian, or Wolf Dog, would undergo further development in England where Queen Charlotte was most influential during the 1760s. She imported her dogs from Germany, but the breed did not receive recognition with the United Kennel Club until 1900. At this time, they were still 20 pounds, down from 30 to 40 pounds. Their Toy size was largely the work of fanciers like Queen Elizabeth from 1900 to 1930. However, exports to the US began showing in the 1800s, and the AKC accepted its first Pomeranian in 1888.

The Siberian Husky’s story began three or four thousand years ago with Chukchi natives of Siberia. Huskies, too, were sled dogs, although they also found use as reindeer herders, nighttime house companions, and hunters. Their specialty as light sled dogs developed as the reindeer became more migratory with the era of harsher winters and better utilized to haul heavy loads. The first Siberian Huskies came to Alaska in 1909 for sled racing, and a couple of teams singlehandedly saved Nome from a diphtheria outbreak almost 20 years later. However, it was Swedish Leonard Seppala’s exhibition tour and racing in New England that would ultimately gain the Siberian Husky’s entry into the AKC in 1930.

The Pomsky’s official origin as a designer dog is better documented than most. With the first litter born around 2012, the Pomsky exploded in popularity in Europe as well as the United States and Canada. While you would think a Labradoodle or some other “Doodle” would be the most popular designer dog, according to Thedogsjournal.com, the Pomsky takes that honor as of 2017 and 2021.

Appearance of Pomsky for Sale

As with all hybrids, Pomskies can show a variable appearance. Since both the Siberian Husky and Pomeranian are members of the Spitz family, certain characteristics will be consistent from one litter of Pomsky puppies for sale to the next.

A Pomsky will be between the eight-pound Pom and 40 to 60-pound Husky. Pomskies are generally 12 to 15 inches tall and weigh 20 to 35 pounds. Pomskies are a more manageable size for apartments and city living than Huskies. However, a Pomsky’s activity level will require you to provide plentiful exercise to make up for a smaller living space.

Like any Spitz, the Pomsky will have a wedge-shaped head, upright triangular ears, strong rounded feet, a thick dual coat, and a tail that curls over the back. Neither the Pomeranian nor Siberian Husky has a double-curled tail. Your dog will probably carry her tail in a semi-circle draped over the back or in a full curl against the hips. The coat will be plush, shedding throughout the year with a significant “blowing” of the underfur in the spring and fall. Under all the fur, your dog will be lean and muscular, and slightly longer than she is tall. Many people familiar with the Pomsky describe it as a miniature and fluffier version of a standard Siberian Husky. However, a Pomsky usually also has a more foxlike look than a Siberian Husky.

Although the “fluffy” plush coat is common in Pomskies, they can have one of three coat types.

Since blue eyes appear to be dominant in Siberian Huskies, your dog will likely sport a pair of baby blues. The shade of blue can range from pale and icy to deep and piercing. Some dogs have one blue eye and the other a different color (heterochromia). Heterochromia also refers to dogs that have blue and another color in the same eye. All dogs are born with blue eyes that may not change until they reach eight to twelve weeks old. Therefore, you may be hopeful when you see a litter of Pomsky puppies for sale, and they all have blue eyes. A Pomsky adult, however, can also have brown, hazel, or amber eyes.

While Poms are more likely to be solid colors like red or apricot, Pomskies often have the pattern variations of the Siberian Husky. The most common colors are black, red, brown, gray, or blue, all with white markings. Additional colors are pied (30% white) like some Poms, solid red or black, black and tan, and solid white. A red Pomsky is striking, although even seemingly solid-colored individuals usually have yellowish undertones on the belly and around the face and ears. A yellow or red Pomsky can also be orange or cream with black or white markings or black-tipped hairs.

Combining the traits of both parent breeds, the Pomsky is confident., lively, intelligent, and friendly. Despite their true joy at entertaining guests with you, Pomskies make good watchdogs for unfamiliar and suspicious activities. Their barks are loud and assertive. However, a well-socialized Pomsky does not tend to be overly protective or at all aggressive. Pomskies are excellent playmates for active children but should be supervised as they can get too rough. Pomskies are medium-sized dogs, but they can knock over small toddlers. A Pomsky can be both vocal and mouthy. Typical vocalizations include yapping, singing, howling, and yodeling. Pomskies usually get along great with other dogs, whether as housemates or as playmates at the dog park or daycare. Their size and speed make them suitable for most breeds except extra-large dogs with high and nondiscriminatory prey drives. The Pomsky himself can exhibit predatory instincts towards small pets like rats, rabbits, birds, and Guinea pigs. Pomskies also may demonstrate an urge to wander or try to escape from the home or yard.

As if the crossbreeding involved in Pomskies is not controversial enough, you may also see an ad for a Teacup Pomsky. This variation allows you to get a full grown Pomsky that is no bigger than the Toy Pomeranian. Some Teacups look more like Poms and others just like Huskies, but they are about 10 inches tall and weigh only three to eight pounds. Common head types are the teddy bear, fox head, and doll-face. The doll-face has a tiny snout and a rather apple-shaped head while the fox head and teddy bear are self-descriptive. Colors vary a bit from the standard Pomsky.

Teacup Pomskies can have more problems than standards and frequently have a significantly shorter lifespan. They can suffer heart failure, organ deficiency, and low blood sugar or hypoglycemia. Breeders achieve the miniature size by matching runt representative specimens of each of the parents. Another possibility is to breed two Teacup Pomskies.

How to Care for a Pomsky for Sale

A Pomsky is a high-maintenance dog like its parents.

Pomskies require a tremendous amount of exercise for their size and a lot of attention. The combination of a working and a companion breed makes the Pomsky a dog that forms strong bonds with its solitary owner or its family. Neglect will make Pomskies bark excessively, chew, dig, pace, and try to find ways out of your home. Moreover, a Pomsky requires 45 to 60 minutes of exercise a day. While their needs are more moderate than a Husky’s, they still need 15 to 20 minutes of their exercise portion to be strenuous. The remainder of the time you can spend on training and socialization of puppies and quiet walks or light jogs with adults. You should continue training your adult Pomsky as well as supplying other activities to keep her mind engaged and active.

Neither the Pom nor Husky are incredibly obedient, but they are exceptionally clever. Their intelligence often translates into playfulness and mischief, so you must stay a few steps ahead of your dog. Pomskies are also strong-willed with short attention spans. You must change up the training routine to capture their interest and keep it. You can easily lose them if they see a squirrel or someone ride by on a bike. Firmness and assertiveness are musts when training your Pomsky, but the wrong tone of voice or physical roughness can cause the sensitive breed to shut you out completely.

Feeding is similar to other dogs in that you want to feed your Pomsky high-quality proteins and fats from animal sources as well as digestible carbohydrates. Common allergens like wheat are something to consider when you have a breed susceptible to food allergies. Always consult with a veterinarian when considering restrictive diets such as low-carbohydrate and no-grain alternatives. Some diets are well-intentioned but fail to supply all your dog’s nutritional needs when they eliminate certain food groups. Many commercial diets provide fats in the form of plants such as coconut or flax with no ill effects. Your Pomsky should eat about 30 to 32 calories per pound as his metabolism will be faster than other medium-sized dogs. Puppies may need up to 60 calories per pound while seniors will require much fewer than 30 calories.

You should plan on brushing your Pomsky at least every other day. During seasonal sheds, you may want to brush your dog a couple of times in a 24-hour period. Pomskies are prone to ear problems if they have allergies. Check your pet’s ears a few times a week. Your dog will require a bath every couple of months and a nail trim every four to six weeks. Brush your dog’s teeth at least twice a week, and have your veterinarian examine your dog’s mouth twice a year. Smaller dogs, especially, are prone to dental problems. Always use a brush and toothpaste recommended for dogs. Some owners give their dogs lion cuts, although shaving your dog’s double coat is not prudent. The coat keeps your dog warm in winter and cool during the summer. 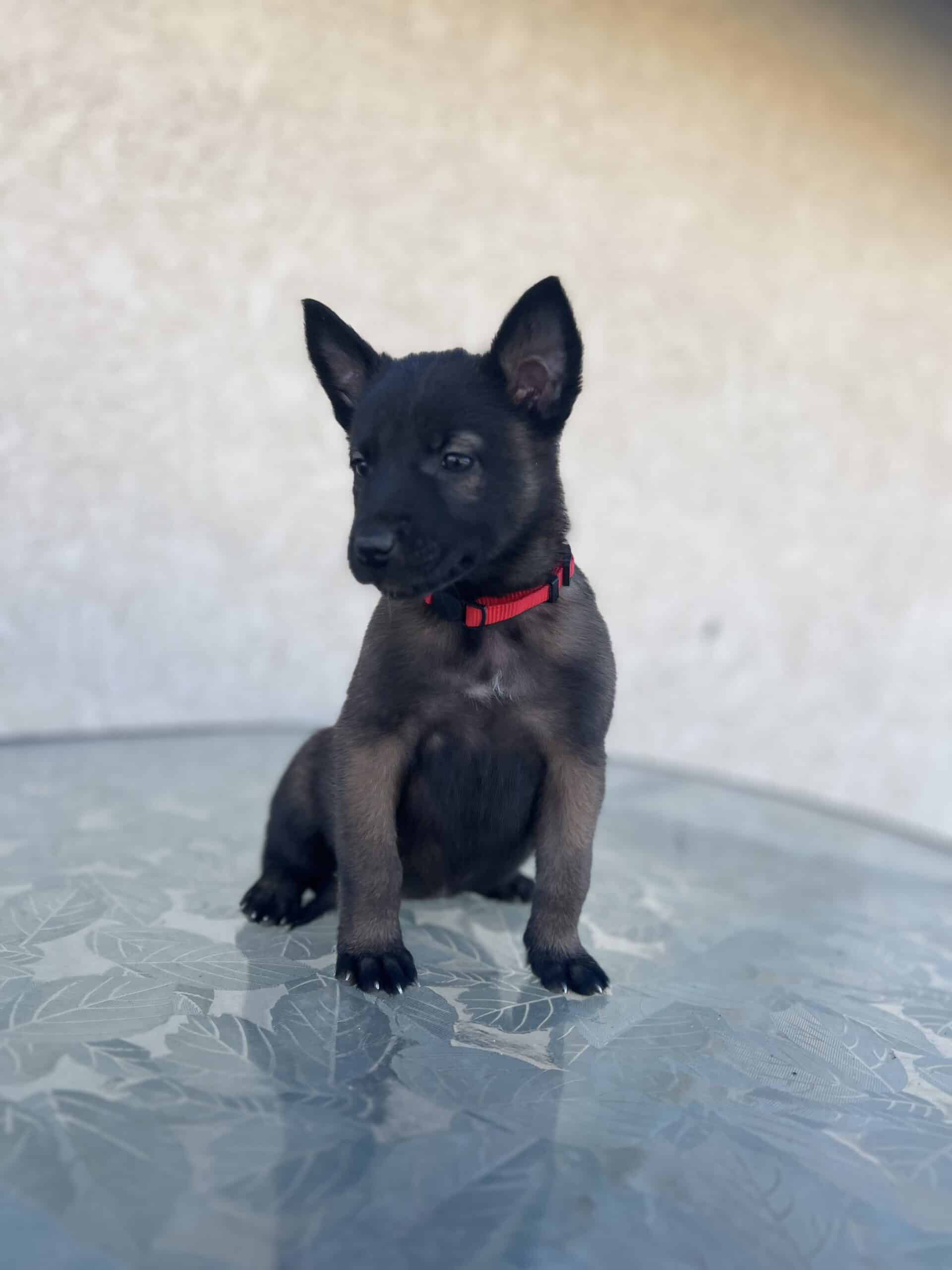 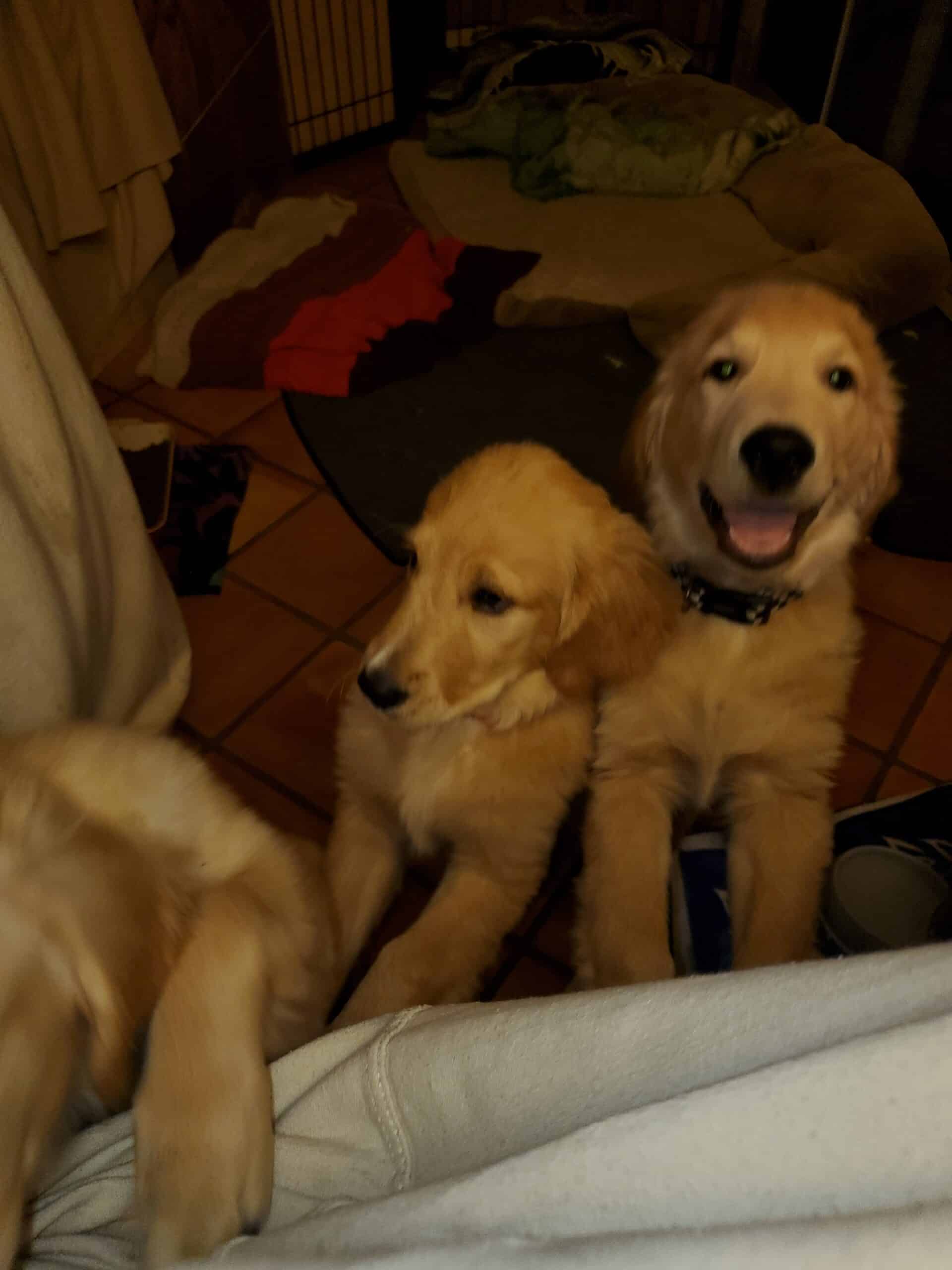 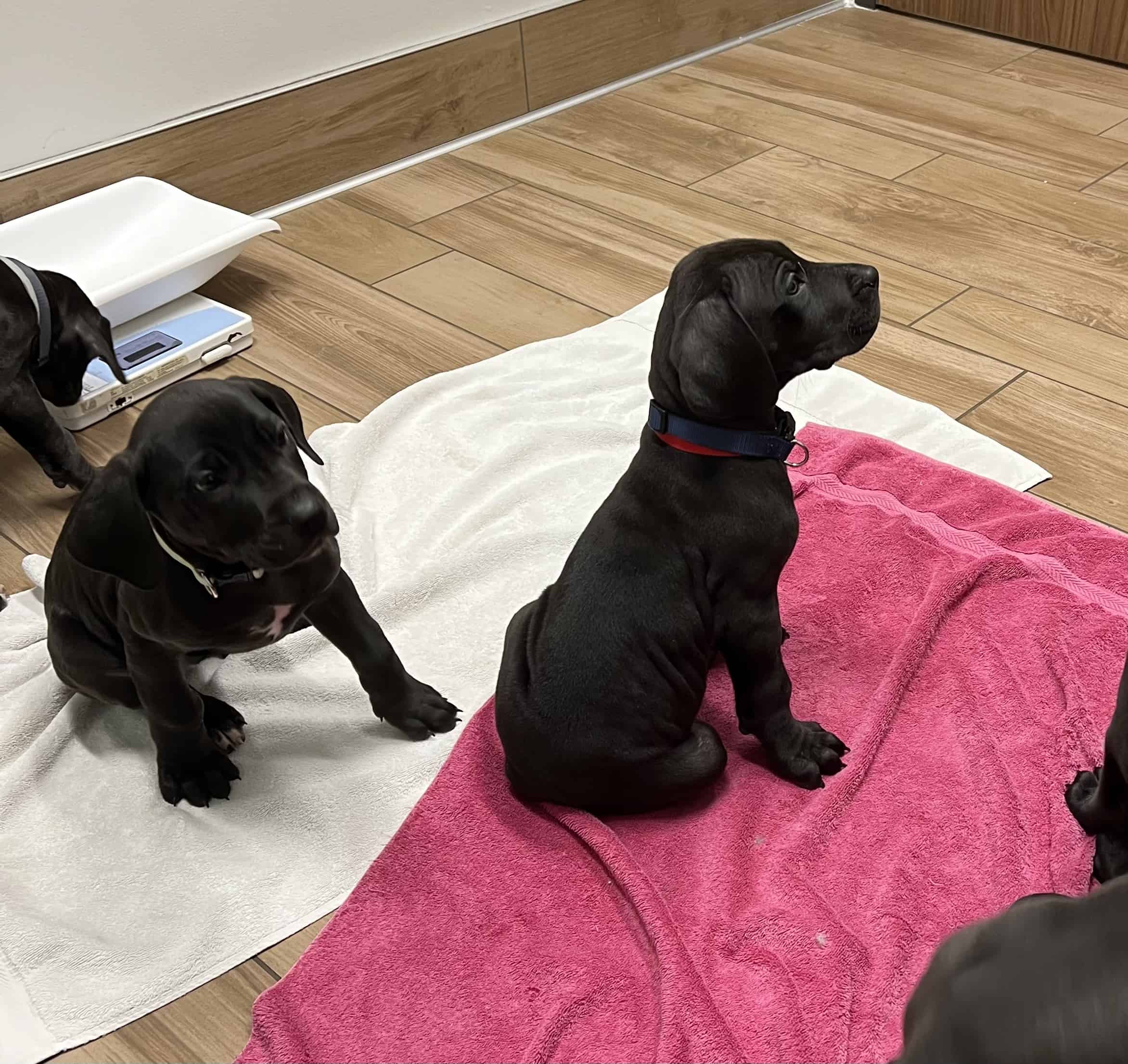 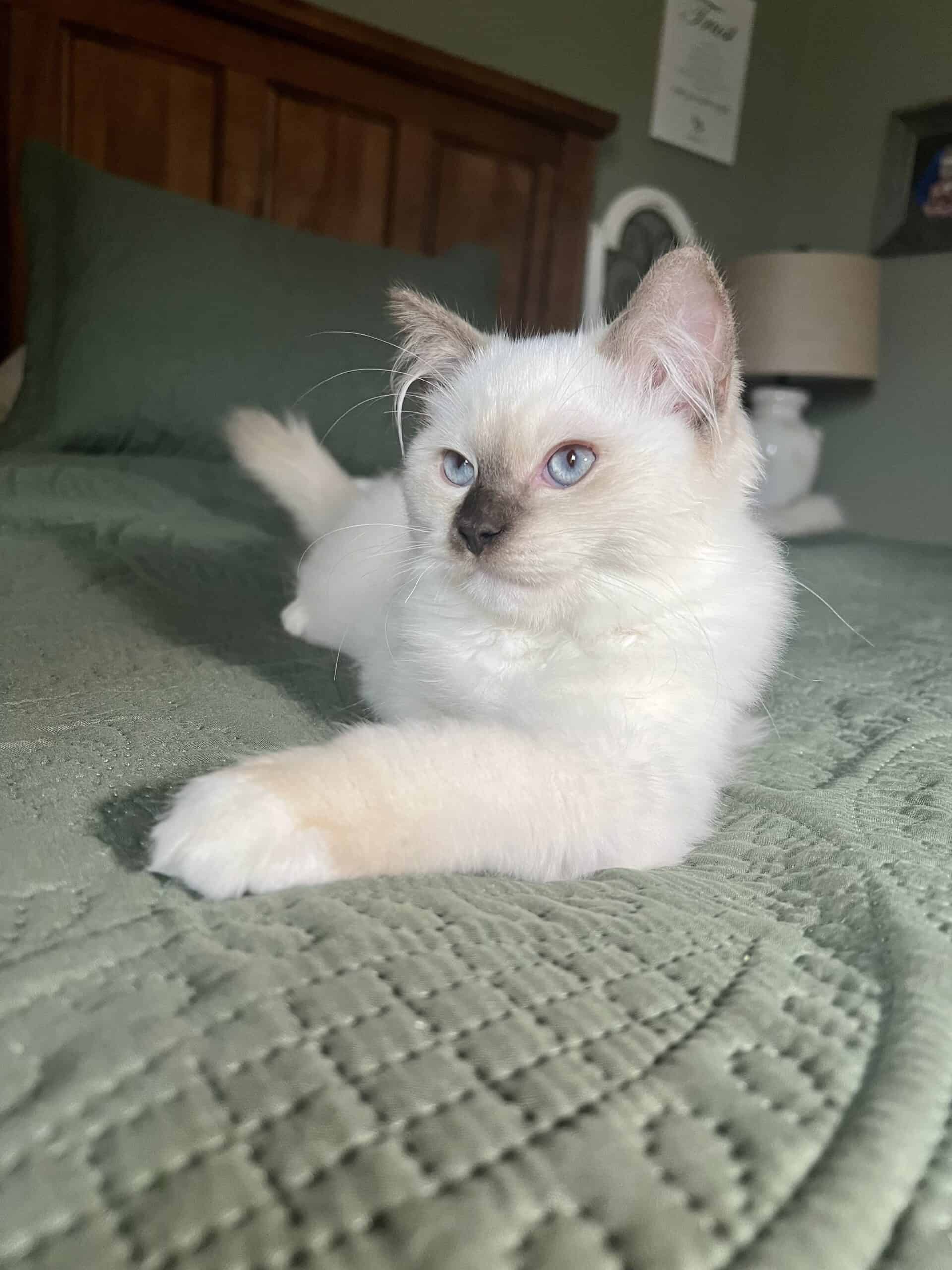